Between 29 and 30 March 2021, UNODC’s Global Firearms Programme (GFP) jointly organised with Paraguay’s Government a virtual workshop on “Data collection and analysis for the monitoring of illicit arms flows”. The workshop was part of the priority activities established under the “National Roadmap against Illicit Trafficking in Firearms”, officially adopted by the Government of Paraguay in September 2020. 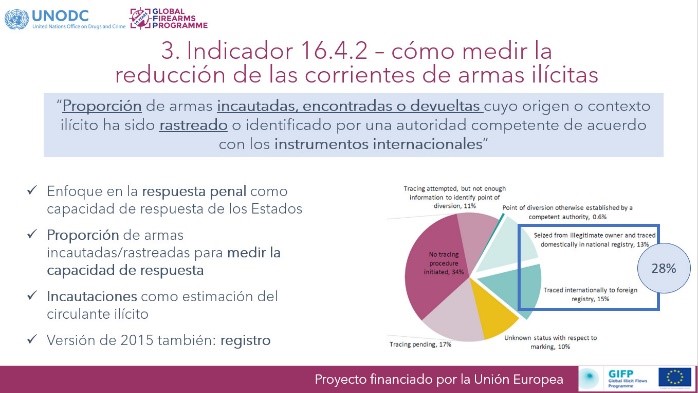 The participants strengthened their capacities to collect and analyse firearms related data and build a solid evidence basis to more effectively detect, investigate and prosecute firearms trafficking. Systematic data collection and analysis is also crucial to monitor illicit arms flows and report on Paraguay’s advancement in achieving Target 16.4 of the Sustainable Development Goals. The workshop also helped to foster inter-institutional cooperation and exchange of information between relevant agencies at national level, which will continue working together to this end. In that regard, the activity contributed to enhance communication and coordination between the participating agencies Paraguay’s Inter-institutional Working Group on Firearms, Ammunition and Explosives. Sharing information is crucial for a comprehensive analysis and gaining an accurate picture of the illicit firearms issue. “The State is one body and it requires that all its organs work together”, stressed Miguel Candia, Head of the Arms and Drugs Policies of Paraguay’s Ministry of Foreign Affairs.

The participants also learned about the use of UNODC’s Illicit Arms Flows Questionnaire (IAFQ), which will help Paraguay’s regular participation in the global initiative to monitor illicit arms flows.

The workshop was organised in the framework of the project financed by the European Union (EU-DEVCO) “Countering transnational illicit arms trafficking through the implementation of the United Nations Convention Against Transnational Organized Crime and its Firearms Protocol”.