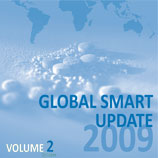 5 November 2009 - Globally, there are significantly more users of synthetic drugs than there are users of heroin and cocaine combined. Unlike the markets for heroin and cocaine, the market for synthetic drugs is constantly evolving, with new products appearing each year. The global Synthetics Monitoring: Analyses, Reporting and Trends (SMART) programme of UNODC was designed to improve the capacity of selected States to generate, manage, analyse, report and use information on illicit synthetic drugs.

Given the speed with which changes in the synthetic drugs markets occur, it is especially important to have a simple mechanism for frequently sharing new information from different parts of the world. In order to meet this need, UNODC has published the Global SMART Update: Volume 2, which illustrates shifts in the manufacture, trafficking and use of various synthetic drugs.

This volume of the Global SMART Update groups information on synthetic drugs in several categories, such as significant or unusual seizures of drugs or precursor chemicals, new locations or methods for clandestine manufacture, changes in legislation to combat synthetic drugs, emerging drugs or user groups and the health implications of using such drugs. The first volume (published in March 2009) highlighted several countries across the globe where new incidents of manufacture had recently been identified, demonstrating the flexibility and speed with which ATS manufacturing processes can become established in any country.

Volume 2 contains several articles related to new types of synthetic drugs and precursor chemicals; while some of them are simply new combinations of existing chemicals, others such as fluoroamphetamine appear to be completely new to the market. Many of the substances are specifically engineered to circumvent international and national controls through subtle modifications made to their chemistry. These substances are almost never tested for human consumption and incidences of poisoning, some fatal, have already been reported.

"West Africa is now on the verge of becoming a source of drugs, not only a transit area. Organized crime is growing indigenous roots"

One fact outlined in the issue was uncovered when a joint team of staff from UNODC and the International Criminal Police Organization (INTERPOL) found the strongest evidence yet that West Africa is now involved in the manufacturing of synthetic drugs, specifically "ecstasy". It was widely known that West Africa was falling prey to the trafficking in drugs from Latin America to Europe, but this shift towards the production of synthetic drugs is an unwelcome development.

At two locations in Guinea, over 5,000 litres of sassafras oil and 80 litres of 3,4-MDP2P, two substances used in the production of "ecstasy", were found. Forensic analysis confirmed the presence of "ecstasy" in a high-pressure reaction vessel found at Kissosso. Four industrial-sized high-pressure chemical reaction vessels were also found at the second site. It is still unclear whether those vessels had been relocated from manufacturing site(s) within Guinea or brought in from outside the country. However, the seizure of chemicals used in the manufacture of "ecstasy", the presence of industrial-scale high-pressure reaction vessels and strong forensic evidence linking machinery and precursors to an intention to synthesize drugs is worrying for Governments in Africa that are not prepared to fight this battle against drugs. More urgently than ever before, a truly global effort is needed to address the synthetic drugs problem.

As UNODC Executive Director Antonio Maria Costa warned today in the Security Council, "West Africa is now on the verge of becoming a source of drugs, not only a transit area. Organized crime is growing indigenous roots." The predicted and much dreaded scenario according to which substances under international control would be produced and processed in the area is unfolding at an alarming rate.