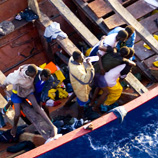 17 December 2010 - People leave their counties for a variety of reasons, whether social, economic, political or religious. Throughout history, migrants have overcome adversity and found a better life elsewhere. Today, globalization has greatly increased the numbers of aspiring migrants.

In 1990, the General Assembly adopted the International Convention on the Protection of the Rights of All Migrant Workers and Members of Their Families. The International Migrant's Day, marked every year on 18 December, acknowledges the world's 214 million migrants, recognizes their contributions to society and, importantly, recalls their human rights.

"It is important to recall, particularly in these turbulent times, the fundamental role that migrants play in strengthening the global economy", said United Nations Secretary-General Ban Ki-moon in his message to commemorate this year's International Migrants Day.

"Migrants contribute to economic growth and human development; they enrich societies through cultural diversity, knowledge and technology exchange; and they improve demographic balance in aging populations. While for many, migration is a positive and empowering experience, many others endure human rights violations, xenophobia, and exploitation", added Mr. Ban.

While there are many legal migrants, many more - tens of millions - are in irregular situations. Human traffickers and migrant smugglers profit from their vulnerability and expose them to abuse and exploitation. The great numbers of illegal migrants who fall prey to these organized criminal groups deserve increased attention. The tragic shipwreck off the coast of Christmas Island in mid-December that caused the death of dozens of smuggled migrants illustrates the risks these migrants face.

Virtually every country is affected by migrant smuggling and human trafficking, which are low-risk but high-profit activities for criminals. States must take a holistic approach to implement laws and policies pertaining to transnational crime, immigration and border control while mainstreaming human rights. Not only should they focus on dismantling criminal networks and tackling organized crime, but they should also ease the very real plight faced by victims of trafficking and smuggled migrants who are vulnerable to human rights abuse.

UNODC calls upon States to ratify the Trafficking in Persons Protocol and the Migrants Smuggling Protocol supplementing the UN Convention against Transnational Organized Crime, and to fully implement the four key pillars: prevention of these crimes, prosecution of the traffickers and smugglers, cooperation with other States to this end and protection of the rights of the trafficked victims and the smuggled migrants.

As the guardian of the Trafficking in Persons Protocol and the Smuggling of Migrants Protocol, UNODC cooperates with stakeholders to assist States to reduce the prevalence of trafficking in persons and smuggling of migrants. Beyond ratification, States must implement these Protocols.

In order to assist Member States to do this, UNODC has developed two handbooks: The Toolkit to Combat Smuggling of Migrants (see fulll story) and The UNODC Model Law against Smuggling of Migrants (see full story). These handbooks give technical guidance and legislative assistance (including a compilation of promising practices) for individual states to address cases of human trafficking and migrant smuggling. To train criminal justice practitioners to investigate and prosecute trafficking and smuggling, UNODC has also issued the Basic Training Manual on Investigating and Prosecuting the Smuggling of Migrants.

The Toolkit to Combat Smuggling of Migrants (pdf)

The UNODC Model Law against Smuggling of Migrants (pdf)