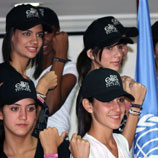 8 September 2010 - Beauty contests are glitzy affairs where many young women's hopes of making it to prestigious catwalks soar. With their eyes fixed on events like New York Fashion Week (opening tomorrow), would-be models from all over the world flock to local beauty competitions, unaware that some of them are organized by traffickers interested in exploiting their dreams.

In Colombia, organized criminals have clearly taken advantage of the national obsession with beauty pageants: a study conducted in 2009 by the National University of Colombia, the Ministry of the Interior and of Justice and UNODC found that modelling and beauty competitions were the most widely employed means used by traffickers to lure young women into exploitative situations, including for the purpose of sexual exploitation.

In an effort to keep participants in modelling and beauty competitions safe from traffickers, in March 2010 the Colombian Government and UNODC teamed up with Elite modelling agency in an innovative awareness-raising project that involved selecting a representative for Colombia in the Elite Model Look International Competition.

During the selection process, more than 750 participants and 176 parents were given vital information on how to identify possible cases of trafficking, how to reduce exposure to this crime and how to advise on existing anti-trafficking mechanisms, such as hotlines.

Participants were also given specially designed bracelets bearing the words "I fight against trafficking" to symbolize their commitment to the cause. Young people aged between 14 and 21 years participated in casting tours held in 15 Colombian cities, including Monteria, Barranquilla, Bucaramanga, Medellín, Bogotá, Cartagena and Cali.

The project was launched in parallel with a screening of the movie trailer for Human Trafficking, starring actress Mira Sorvino, UNODC Goodwill Ambassador for the fight against trafficking in persons, and culminated on 1 September 2010, when the winner of the Elite Model Look International Competition was announced. The winner will use her crown to promote messages on human trafficking throughout the country.

UNODC Colombia has a long history of establishing private-public partnerships to raise awareness about trafficking in persons. In early 2004, in cooperation with a Colombian private news and entertainment channel, a soap opera entitled Todos Quieren con Marilyn was produced and broadcast in Colombia for a year. In 2008, the documentary Slaves of Our Days was produced in partnership with a private entertainment channel and broadcast widely.

Since 2003, UNODC in Colombia has worked closely with the Colombian Government to combat human trafficking. A project was designed to assist authorities in developing and implementing a comprehensive national anti-trafficking strategy and victims statute, and to support the criminal justice system in the prevention, investigation and prosecution of trafficking.

In 2005, the Colombian Government adopted a comprehensive law against trafficking in persons in line with the Protocol to Prevent, Suppress and Punish Trafficking in Persons, Especially Women and Children, supplementing the United Nations Convention against Transnational Organized Crime.