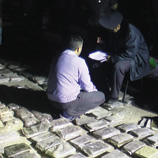 17 April 2012 - Border management and security in Central Asia are major challenges for the region that also directly affect other countries. To enhance border security in the region and beyond, ministers and senior officials from Afghanistan, Kazakhstan, Kyrgyzstan, Russian Federation, Tajikistan, Turkmenistan, the United States of America and Uzbekistan, along with representatives of the European Union and other international organizations, attended the Tenth Ministerial Conference of the Central Asia Border Security Initiative, held in Vienna.

Mr. Yury Fedotov, UNODC Executive Director, told delegates: "Developing effective border controls and countering drugs trafficked from Afghanistan is one of the key challenges for the countries of Central Asia".  Mr. Fedotov encouraged Central Asian border control and law enforcement agencies to cooperate more closely, not only among themselves, but also with Afghanistan and its neighbours.

UNODC has been working to enhance border security in Central Asia since 1993. An example of a successful initiative is the Central Asian Regional Information and Coordination Centre, which serves as the main centre in Central Asia for intelligence exchange and the coordination of joint operations. The Centre has achieved impressive results: trafficking channels have been identified, traffickers arrested and considerable amounts of opium have been seized.  Other regional initiatives supported by UNODC include the Triangular Initiative, comprising Afghanistan, the Islamic Republic of Iran and Pakistan, Operation TARCET (which controls the flow of precursor chemicals to manufacture drugs), and the Global Container Control Programme.

The Central Asia Border Security Initiative is a forum for coordination and discussion among all stakeholders involved in border management and drug control in Central Asia. It promotes comprehensive and integrated border management to improve border security and to facilitate trade and the movement of people as a way of encouraging economic development.

The Conference was jointly organized by the Austrian Federal Ministry of the Interior, the European Union, the Organization for Security and Co-operation in Europe, the United Nations Development Programme and UNODC.