For an ecology of the mind: blending drug rehab with nature conservation in Sumatra 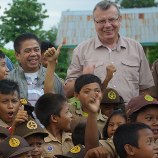 11 December 2012 - Dev (not his real name) had been using drugs of increasing potency during his decade-long struggle with substance abuse. First alcohol. Then cannabis. Then crystal meth, which he snorted. Then heroin, which he injected. He lost his job. He was spiralling downwards. Desperate, his family admitted him to a drug treatment centre in Jakarta where he underwent detoxification and then a 6-month treatment programme.

But it is normally after this point that the risk of relapse is highest - the time when the former user goes back to his or her old friends and old habits. The greatest challenge is to break free from the sort of environment which drives users towards relapse.

Dev got lucky. Following the end of his treatment, he entered into a new programme run by the Indonesia National Narcotics Board (BNN in Bahasa language) which has developed an innovative blend of drug rehabilitation and nature conservation in that tip of Sumatra which is closest to the main island, Java.

The place is the Tambling Wildlife Nature Centre (TWNC) and represents a public-private partnership between the BNN and the TWNC.

Started in January 2012, the TWNC programme offers former drug users time and space to recover their psychological balance and learn new skills which can prepare them for work - including in Indonesia's expanding eco-tourism sector. Some of the former users are involved in the TWNC's efforts to rehabilitate tigers and return them to the wild.

The peace and quiet of Tambling's serene location helps them recover their own 'ecology of the mind'.

The post-treatment programme is part of BNN's efforts to develop its range of Government-provided drug dependence treatment and rehabilitation services across the Indonesian island chain. Six times a year, the TWNC becomes home for around 30 ex-users, over a two-month period. Most are selected from among the 1,000 patients who undergo detoxification and treatment annually in the Lido treatment centre near to Jakarta.

Lido provides a 6-month treatment/rehabilitation programme which is then followed - for some - by the 2-month conservation-based rehabilitation programme either in Tambling, or one of the other similar facilities at Baddoka, Sebaru Island, or at Wakatobi Island (in South Sulawesi). Eventually they are trained to find work in the commercial sector.

Dev, whose parents left Mumbai before he was born to make a future for themselves in Indonesia, says that he is glad his parents never abandoned him. "In fact, they love me even more now." He plans to stay with the TWNC for the immediate future and find strength and his own kind of ecology.

Dev's story - and many like his - were shared with UNODC Executive Director Yury Fedotov who recently visited the TWNC along with BNN Head, Gories Mere. "Some people say that we should focus only on human beings - not animals - as our first priority. But this excellent model of rehabilitation in Sumatra shows that we can do both. In fact, we need to both if we are to save our planet and our chances for survival in a time of accelerating climate change."