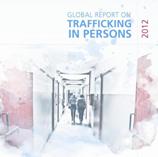 12 December 2012 - The 2012 Global Report on Trafficking in Persons released by UNODC has revealed that 27 per cent of all victims of human trafficking officially detected globally between 2007 and 2010 are children, up 7 per cent from the period 2003 to 2006.

"Human trafficking requires a forceful response founded on the assistance and protection for victims, rigorous enforcement by the criminal justice system, a sound migration policy and firm regulation of the labour markets," said Yury Fedotov, Executive Director of UNODC of the findings.

Also worrying is the increase in the number of girl victims, who make up two thirds of all trafficked children.  Girls now constitute 15 to 20 per cent of the total number of all detected victims, including adults, whereas boys comprise about 10 per cent, says the Report, which is based on official data supplied by 132 countries.

Within this picture, there are significant regional variations.  While the share of detected child victims is 68 per cent in Africa and the Middle East, and 39 per cent in South Asia, East Asia and the Pacific, that proportion diminishes to 27 per cent in the Americas and 16 per cent in Europe and Central Asia.

The vast majority of trafficked persons are women, accounting for 55 to 60 per cent of victims detected globally.  However, the total proportion of women and girls together soars to about 75 per cent, with men constituting about 14 per cent of the total of detected victims. Nonetheless, this is not a uniform picture as one in four detected victims is a male.

Mr. Fedotov acknowledged the current gaps in knowledge about this crime and the need for comprehensive data about offenders, victims and trafficking flows. Still, the number of trafficking victims is estimated to run into the millions.

Victims of 136 countries were detected in 118 countries between 2007 and 2010, during which period, 460 different flows were identified.  Around half of all trafficking took place within the same region with 27 per cent occurring within national borders.  One exception is the Middle East, where most detected victims are East and South Asians.

Trafficking victims from East Asia have been detected in more than 60 countries, making them the most geographically dispersed group around the world. Victims from the largest number of origin countries were found in Western and Central Europe.

There are significant regional differences in the detected forms of exploitation. Countries in Africa and in Asia generally intercept more cases of trafficking for forced labour, while sexual exploitation is somewhat more frequently found in Europe and in the Americas. Additionally, trafficking for organ removal was detected in 16 countries around the world.

Global Report on Trafficking in Persons 2012