"Put yourself in my shoes": a human trafficking victim speaks out 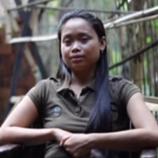 28 November 2012 - Women make up two-thirds of the world's human trafficking victims. The vast majority of these female victims are young women who are lured with false promises of employment and are then imprisoned, beaten or threatened with violence, have debt imposed and are stripped of all control over their lives. On the commemoration of the International Day for the Elimination of Violence Against Women which is being held by the UN in New York today, we present the brave testimonial of Memey, a 28-year-old Indonesian woman who was trafficked and forcibly recruited into commercial sex work and who is now committed to helping others.

At the Conference of States Parties to the UN Convention against Transnational Organized Crime held in Vienna recently, Memey spoke to international delegates in order to draw attention to the plight of victims of human trafficking. Sadly, her story is similar to that of millions of men, women and children, who are duped by criminal organizations in their search for a better life.

Memey was born in Temanggung Central Java, Indonesia. Coming from a poor family and having had only a rudimentary education, when her husband died and left her with a small child to feed she saw no option but to try her luck seeking employment abroad. "I looked at my son and my family and knew I could not meet their needs", she explains. "A neighbour told me that there was an opportunity to work abroad in Malaysia as a waitress. Since I had worked in Singapore previously, I thought this would be a similar, if not better, opportunity."

Criminal networks quickly took advantage of her vulnerable situation and preyed on her illegal status with the promise of work. Soon after her arrival, Memey was met by a contact person and taken shopping for new clothes and make-up. "After dinner, a man came for me and took me to a hotel room nearby to start work. That was when it finally dawned on me that it was not a waitressing job. I was being made to work as a sex worker." Memey was held captive for four months by middlemen who forced her to do sex work.

"We were watched closely, there was no opportunity to escape. Our passports were taken away, and we did not have access to a phone either." Memey chose not to try and run away because she saw what happened to the other women who tried - they were beaten and threatened - and she was too afraid. But she decided to tell every client her story, many of whom were unmoved and did not care.

Memey was lucky that one she day met a client who was different. "I told him that I was being forced to do this work against my will. He did not touch me. He gave me a cell phone and I called my family in Indonesia."

At the same time, the traffickers holding the women captive began to get nervous because the Malaysian authorities had received a tip-off about what was going on. The women were moved from location to location in an effort to mislead the police. In the midst of this, a fellow captive friend also called her family in Indonesia, who contacted a relative who eventually rescued them. "I don't know how he did it, but at last we were free." She finally escaped, but with a grim reminder of her past - she was infected with HIV.

When she returned home, Memey did not tell her family about the work she had been forced to do in Malaysia. "I was ashamed", she adds. "I also did not talk about my HIV status for two years afterwards because there is a lot of stigma and discrimination attached to it."

Later, as Memey learned more about HIV and how it was managed, she decided to reveal her status to family and friends and to form a support group to assist people living with HIV and AIDS. "When I went through this I was completely alone and didn't have any special assistance from the people who know the information, so I decided to help others." The group SmilePlus, supported by the local government, allows members to share experiences in dealing with the disease as well as to get information and have access to routine medical care.

Memey's message for women looking for work abroad is to get as much information as possible. "If you really need to work abroad, go to a legal centre to get more information about the living conditions, the culture and the working environment in the new country. Make sure you have proper papers and documentation for working abroad, and check out the (prospective) employers at a legal centre."

Memey ended her testimonial with this plea: "Imagine you were in my shoes, imagine this was your sister, your daughter. It could be you"

UNODC's Blue Heart Campaign seeks to encourage involvement and inspire action to raise awareness and to help stop the crime of human trafficking. It allows people to show solidarity with the victims of such trafficking by wearing the Blue Heart, and aims to make the Blue Heart an international symbol against this crime which strips people of their human dignity. UNODC also manages the United Nations Voluntary Trust Fund for Victims of Trafficking in Persons, especially Women and Children. Officially launched in 2010 by Secretary-General Ban Ki-moon, the Trust Fund supports the provision of on-the-ground humanitarian, legal and financial aid to victims of trafficking and provides members of the public an avenue through which they can donate to this important cause.

Memey's video "Don't Come Back: The Story of a Migrant Domestic Worker who survives Human Trafficking".