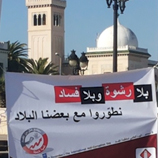 20 December 2013 - International Anti-Corruption Day, 9 December, is observed the world over with Governments, non-governmental organizations, individuals and international organizations organizing an array of activities to highlight how corruption harms countries and ordinary citizens.  Discussions, educational and cultural events, marches, media and social media activities attested to the growing discontent of people with corrupt practices.

This year, a new global campaign was launched under the theme Zero Corruption - 100% Development by UNODC and the UN Development Programme (UNDP), the two United Nations bodies leading global awareness campaigns against corruption since 2009.

UNDP and UNODC Field Offices across the world took the universal message against corruption and tailored it to local audiences.  Here are some highlights of a successful partnership to get the word out through many dozens of events involving thousands of activists around the world. 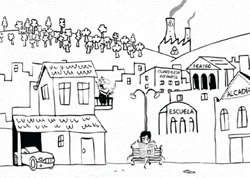 The UNODC Liaison and Partnership Office in Brazil produced a cartoon animation public service announcement (PSA) about the corrosive effects of corruption and role of the citizen and state authorities in tackling it. The UNODC Office in Indonesia presented "Korupsi and Kemiskinan" a 12-minute documentary film, to support the Ministry of National Development Planning (Bappenas) in implementing the National Strategy for Prevention and Eradication of Corruption (Stranas PPK) and PSAs showing the aspirations of the Indonesian people for a better country without corruption.

Narrated by Nicholas Saputra, a famous Indonesian actor, the film shows the Government of Indonesia's strategy to fight corruption. It is a tool to be used by all government ministries and agencies, and for wider public media campaigns on preventing and rooting out corruption in Indonesia.

UNODC Pakistan in collaboration with the National Accountability Bureau (NAB) organised an Essay contest and poster competition as a lead-up to the Anti-Corruption Day. Children and young people aged between 10-22 years old wrote essays on the subject "Prevention of Corruption is a Must for Development" .  The participants considered the causes of corruption, its impact on society and possible measures to tackle the problem. The drawing competition on the same topic was open to contestants aged 8-19 years old. "These youth are the leaders of tomorrow and the creativity that they have demonstrated in this competition bodes well for the future of Pakistan", said UNODC Country Representative for Pakistan, César Guedes, who gave numerous media interviews.

In Paraguay, a series of activities were carried out by the government in cooperation with UNODC, including a ceremony at the Government Palace attended by President Horacio Cartes. During the event, the National Anti-Corruption Secretariat announced the beginning of inter-agency work supported by UNODC Brazil towards the development of a national strategy to combat corruption. An exhibition on strengthening of the judiciary by control, transparency and citizen participationwas held in the Palace of Justice. A National Judicial Integrity Week organized by the Supreme Court took place with various activities to highlight the role of the judiciary, transparency and citizen participation. 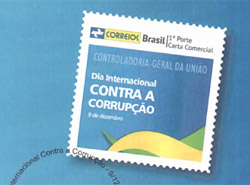 A new postage stamp was launched by the Post Office in Brazil.

In Bolivia, the Minister of Institutional Transparency and UNODC Representative Nino de Leo signed an agreement for an innovative project to strengthen institutional transparency within municipal administration and direct public access to information for the people of 30 different municipalities of the country.

During an event attended by Mrs. Adriana Cordoba, District of Bogotá, Jorge Mario Diaz, Vice President of Governance Chamber of Commerce of Bogotá, and Bo Mathiasen, UNODC Representative in Colombia, UNODC launched the Anti-Corruption Guide for Business, an instrument that facilitates the implementation of control plans in the various sectors.

To mark the International Day Against Corruption and the 10 th anniversary of the United Nations Convention Against Corruption, UNODC in India, in collaboration with KPMG and the Confederation of Indian Industry (CII) organized an Anti-corruption consultation with Indian B20 companies and Indian industry in Mumbai, India. The consultation provided a platform for Indian companies represented at the B20 to share their practices with regard to countering corruption and to debate ideas for possible solutions. In addition, a 2014 table calendar on anti-corruption was launched at the event, which serves as a yearlong reminder of the concerted effort that needs to be made daily to counter corruption.

In Guyana, Transparency Institute Guyana united with members of civil society and opposition politicians in a rally during which marchers chanted the slogan "zero percent corruption 100 percent development…stop the wholesale thieving,"  before the Parliament Building. "The objective is to sensitize the public about what corruption is and how it can affect them and what they need to do", said the event's organizer, TIGI's President, Anand Goolsarran, adding that "this has no politics in it, it is a civil society march to observe this day to recognize that there are many out there, the poor, the disadvantaged, unemployed youths, the vulnerable women and children, people living below the poverty line," as a result of corruption. 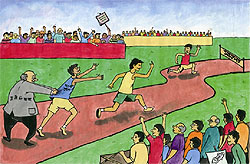 Transparency International Bangladesh presented a series of the best anti-corruption cartoons. Human chains were also formed in various places throughout the country to demonstrate the unity of people in combating corruption.

The Africa Network for Environment and Economic Justice launched the 'fight CORRUPTION' campaign and together with the Niger Delta Anti-Corruption Network marked the World Anti-Corruption Day with the theme Zero Corruption, 100% Development.

A public awareness campaign was also launched by the Tunisian Association of Public Auditors. The global message Zero Corruption - 100% development was promoted in various media. The campaign will be held for 3 months and presented in government and educational institutions.

Other activities held by activists of civil society to mark the Day include rallies in Dominican Republic and Malaysia; a free film festival and a 10-kilometre road race in Guatemala; theatrical performances in Trinidad and Tobago and street theatre, videos, live music and hip hop performances in Morocco; a festival with a live concert in Hungary; campaigns "Riparte il Futuro" in Italy, "Time to Wake Up" in Portugal, and "No Impunity" in Egypt.