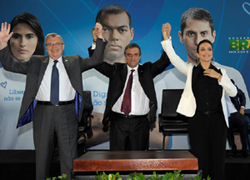 10 May 2013 - Brazil is the latest country to join the Blue Heart Campaign against Human Trafficking, with singer Ivete Sangalo appointed as a national UNODC Goodwill Ambassador and face of the campaign. There are millions of victims of human trafficking across the globe. The campaign aims to mobilize Brazilian society against this crime.

The launch was marked at a ceremony in the Brazilian Ministry of Justice yesterday, 9 May 2013, and counting with the presence of UNODC's Executive Director Yury Fedotov, Justice Minister José Eduardo Cardozo, Ms. Sangalo and several senior government representatives. During the event, the singer was officially appointed by Mr. Fedotov: "Ivete Sangalo is one of the most respected, popular and successful artists in Brazil. Her music transcends Brazilian borders. Now she will be able to lend her beautiful voice to those who have no voice".

Ms. Sangalo explained that her role as the campaign's ambassador in Brazil will be to bring to the public the facts about this invisible crime, and remind people of the power of transformation they hold through denunciation. "The Blue Heart is a way of making the red heart beat", she said.

Minister of Justice Cardozo said the campaign puts into practice one of the main commitments of the Brazilian National Plan to Combat Trafficking in Persons, published recently: "The most important thing is to avoid this crime. Prevention is a key aspect of the campaign, so people can be conscious, denounce and allow actions to be taken to prosecute the criminal and protect the victim."

UNODC's Executive Director said: "No country can escape from this terrible crime, which directly violates the most fundamental human rights. Trafficking in persons can happen in your country, in your city, in your street and even in your own house. That is exactly why the Blue Heart Campaign was created, to raise awareness at a global level about this problem that is all around us. Therefore, all the nations have the responsibility of confronting trafficking." 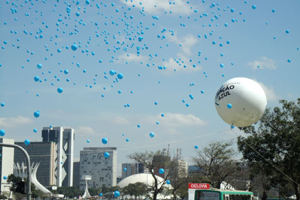 According to Mr. Fedotov, in order to eradicate this crime, a comprehensive and coordinated approach is needed at national, regional and global levels.

With the slogan "Freedom can't be bought. Dignity can't be sold. Denounce trafficking in persons", the campaign adds Brazil to the international advocacy movement against this crime. One of the key activities will be an awareness raising video featuring Ms. Sangalo to be aired on Globo Television, reaching out to millions of viewers.

As part of the campaign, a website site was created and flyers, posters and pins will be distributed in centers and offices for combating trafficking in persons all over the country. The Secretariat for Human Rights, the Secretariat for Women's Policies and television giant Globo TV are also partners.

For the Brazilian National Justice Secretary, Paulo Abrão, the use of Blue Heart as common and universal symbol allows for wide social mobilization and facilitates the identification of centers of support to victims and denunciations. Mr. Abrão explained that the slogan is a statement to Brazilian society that human beings are not commodities, and that the government is determined to combat trafficking in persons.

Trafficking in persons is a crime that ruthlessly exploits women, children and men for countless reasons, including forced labor and sex.