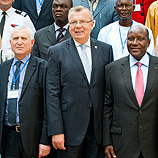 29 October 2013 - UNODC Executive Director Yury Fedotov paid a two-day visit to Abidjan, Côte d'Ivoire, where he addressed a high-level regional conference to strengthen support for the fight against organized crime and drugs in West Africa.

"This conference gives us the opportunity to renew our common commitment to face these challenges and to mobilize the necessary resources to act together in a coordinated manner," he said.

It was organized by the Economic Community Of West African States (ECOWAS), UNODC and the United Nations Office for West Africa (UNOWA ). The conference, held on 28 October, aimed to mobilize resources to support ECOWAS initiatives and to ensure a coordinated approach in the fight against transnational organized crime, including drug trafficking , insecurity in the Sahel and piracy in the Gulf of Guinea.

West Africa is recognized as a transit area for cocaine trafficking between Latin America and Europe. More recently, the area has also become a centre for methamphetamine production and has seen increasing drug use locally.

Mr.Fedotov also attended a meeting of the political committee on the West Africa Coast Initiative (WACI) on 29 October 2013.

"UN Secretary-General Ban ki-Moon as well as the UN Security Council have repeatedly highlighted the problems of drugs, crime and terrorism, and their terrible impact on regional security and development. The West Africa Coast Initiative is a direct response to these problems," he said.

"An integrated, regional approach like WACI is critical in addressing the borderless threats of drugs and crime. A regional response also helps to ensure that as enforcement and criminal justice succeed in one place, the problems are not merely displaced from one state to another."