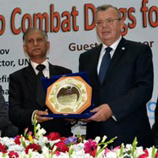 Describing Dhaka as an "energetic" and "vibrant" city, the UNODC Chief discussed first his mission to South Asia and his talks with government leaders to promote an integrated regional response to these challenges. One that sought to build support among nations, promote partnerships within the UN System and deliver solutions at the grassroots level.

He subsequently linked these ongoing actions to UNODC's wider activities when he said UNODC's global mandate "encompasses many challenges, including drug trafficking and the many forms of organized crime, among them human trafficking and migrant smuggling, wildlife poaching, counterfeit and fraudulent medicines, cyber-crime and piracy, as well as terrorism, money laundering and corruption."

The foundation for this work, he said, were the UN Conventions that have been ratified by the vast majority of countries, including Bangladesh. These included the three international drug control conventions; the Convention against Transnational Organized Crime; and the Convention against Corruption. The conventions are, said Mr. Fedotov, "more than just pieces of paper." They commit counties to ratify them and to undertake action.

But UNODC's work was not simply about legislation, it is also about "people". Describing young people as a country's "greatest asset," Mr. Fedotov told the students your "health is so important to achieving your full potential." He then made a connection between drug trafficking and how it fuels violence and corruption, undermines development, and is implicated in other serious crimes and human rights violations. 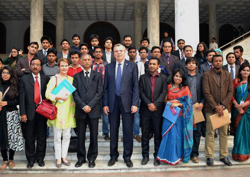 Telling the assembled students they were "youth leaders" he said they needed to take direct action to motivate their peers. UNODC was helping in this, Mr. Fedotov said, by launching a Youth Initiative that had connected over 700 schools and youth groups from over 100 countries. The initiative was helping young people to share experiences through social media, but also to "inspire".

The afternoon event at Dhaka university was organized by the Ministry of Foreign Affairs, represented by Secretary Shahidul Islam, the University of Dhaka, represented by Vice Chancellor Prof. Dr. A. A. M.S. Arefin Siddique and UNODC. Support was further provided by the UN Information Centre and the UN Youth Students' Association, Bangladesh. The special guest of honour was Dr. Md. Mozammel Haque Khan, Senior Secretary. Ministry of Home Affairs.