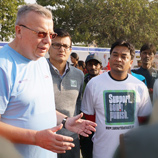 2 December 2014 - To mark World Aids Day, the Executive Director of the UN Office on Drugs and Crime (UNODC), Yury Fedotov, attended a football match at the Jesus and Mary College Soccer Ground in New Delhi today with teams comprised of drug users and people living with HIV.

Mr. Fedotov officially started the match by kicking the ball. He also talked to players and community leaders about their experiences and activities, and posed for the cameras in a specially designed jersey. Speaking afterwards, he said: "Communities are best placed to help key groups such as drug users and those living with HIV. They offer local support that upholds an individual's human rights and ensures that no one is isolated from the society where they belong."

"A football match requires teamwork, skill and an overall plan for success. When a team falls behind it tries to 'close the gap'. Communities help individuals in a similar way through a strategy delivered by skilled staff that offers HIV and drug services to all those in need. When there is a service gap it also needs to be closed," he went on to say.

UNODC, and its partners in UNAIDS, are currently campaigning for HIV to be confronted by 'closing the gaps' in testing, treatment and prevention, as well as to end AIDS by 2030. There are 35 million people living with HIV globally; many of these individuals confront stigma and discrimination on a daily basis.

India is a high priority country for UNODC. There are thought to be around 180,000 people who inject drugs in India. The HIV prevalence among people injecting drugs is estimated at 9.2 per cent.

Mr. Fedotov is in India as part of a mission to South Asia, which takes in visits to Nepal, Bhutan and Bangladesh. He held separate talks, before the community football match, with India's Finance Minister Arun Jaitley and Vinod Kumar, Additional Secretary at the Ministry of External Affairs. The UNODC Chief also paid a visit to UNODC staff in their office in India's capital.

In comments made at the end of his meeting at the Ministry of External Affairs, Mr. Fedotov said, "India is an important partner at the regional and international levels and has an essential role in confronting drug trafficking in South Asia and beyond. I very much look forward to closer cooperation and coordination between UNODC and India in the future."