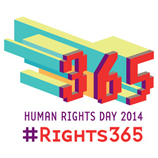 10 December 2014 - Today is Human Rights Day, which marks the adoption of the landmark Universal Declaration of Human Rights by the UN General Assembly in 1948. For billions of people in poor countries, health is a basic right, which UNODC supports in many ways. However, many forms of transnational organized crime, including illicit drug trafficking and trafficking in persons, frequently lead to serious human rights violations. Strengthened rule of law is key to the international community's response to these challenges.

"This is true when we are helping to protect the victims of crime as well as guarantee fair trials for the perpetrators; supporting young people to escape the grip of illicit drugs; ridding the world of the discrimination aimed at those living with HIV, including in prison, and those who inject drugs; and helping people to understand that drug use is a health problem that calls for voluntary and humane treatment," said UNODC Executive Director Yury Fedotov.

UNODC mandates in supporting implementation of the UN conventions related to drugs, crime, corruption and terrorism have direct human rights implications. UNODC works to bolster Member States' capacities to address transnational threats as a way to promote the rule of law, which is conducive to the protection of human rights.

UN Secretary-General Ban Ki-moon called on States to "honour their obligation to protect human rights every day of the year. I call on people to hold their governments to account. And I call for special protections for the human rights defenders who courageously serve our collective cause." For his part, UN Human Rights Chief, Zeid Ra'ad Al Hussein said: "The power of the Universal Declaration is the power of ideas to change the world. It tells us that human rights are essential and indivisible - 365 days a year."

Also on this day, UNODC and the Office of the High Commissioner for Human Rights, the UN High Commissioner for Refugees, the International Organization for Migration and the International Maritime Organization released a statement entitled 'Protection at Sea in the Twenty-First Century'. The statement addresses the loss of life, injury, trauma and serious human rights violations affecting migrants, asylum-seekers and refugees traveling by sea, and highlights the importance of concerted action from the international community in identifying, prosecuting and punishing the criminal gangs who are responsible for human rights abuses and for arranging sea transportation in breach of all safety regulations.

Full joint statement: 'Protection at Sea in the Twenty-First Century'