UNODC and Kyrgyzstan strengthen their cooperation against illicit drugs and crime 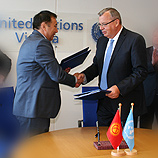 25 June 2014 - The Executive Director of UNODC, Yury Fedotov, and the Vice Prime Minister of Kyrgyzstan, Abdyrahman Mamataliev, launched a new integrated country programme this week, reinforcing their cooperation in the areas of illicit drugs, and organized crime.

Speaking after the signing ceremony, Mr. Fedotov said, "Confronting the flow of illicit Afghan opium is of paramount importance for the security of the region. Effective drug control in Kyrgyzstan can also assist in UN-wide efforts to consolidate peacebuilding and conflict prevention across Central Asia." This unique country programme in the region will help UNODC deliver support to Kyrgyzstan, as well as to Central Asia in general.

Vice Prime Minister Mamataliev noted his appreciation for UNODC's assistance to the Kyrgystan government. He said that "by implementing different regional and national projects, including the Integrated Country Programme, UNODC was helping to effectively counter opiates flowing from Afghanistan".

Kyrgyzstan is the first country in Central Asia to pilot UNODC's programme-based approach. The programme will be closely aligned with other UNODC regional and global strategies, and includes activities ranging from law enforcement, prison management and anti-corruption to criminal justice, drug prevention and treatment.

Implemented by UNODC's Bishkek office, in close cooperation with Kyrgyz authorities, the programme will be overseen by a governance committee providing essential oversight and direction. The programme also builds on technical assistance efforts provided by UNODC to the Kyrgyz Republic through local projects supporting the State Service on Drug Control.

UNODC developed the programme following an assessment made in November 2010, and a 2011 roundtable for experts held in Bishkek. These efforts helped Kyrgyzstan to identify priority areas where UNODC's competence and experience could support their own activities.