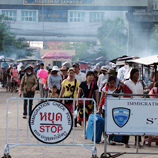 31 October 2014 - Speakers at a high-level UNODC meeting today warned that transnational crime and public security threats in Asia risk overwhelming border management, law enforcement and justice agencies of many states. This comes as the acceleration of trade and migration flows in the region increases.

"Transnational organised crime in Southeast Asia alone is conservatively estimated to generate close to USD $100 billion per year, threatening intended economic and social benefits of regional integration," said UNODC Representative for Southeast Asia and the Pacific Jeremy Douglas at the UNODC high-level meeting, Supporting the Integration of Asia Through Effective Public Security. "Proceeds of organised crime from several other parts of Asia are also significant and growing, and have a destabilising impact.

Experts at the Conference cautioned that extensive investment in transportation systems and a coordinated lowering of trade and visa barriers constituted risks which were not fully understood or considered by many regional policy leaders.

During the meeting, participants noted that drug trafficking and crimes such as human trafficking, smuggling of migrants, trade in counterfeit goods and fraudulent medicines, as well as environmental crimes such as the trafficking of illegal timber and wildlife are likely to increase unless effective national and regional responses, including cooperation mechanisms, are quickly established and supported.

"Without effective and integrated border management, law enforcement and justice strategies, organized criminal groups will continue to expand without respect for borders and the sovereignty of states, threatening prosperity and public security. Increased illicit revenues will spread corruption, distort and impact economies, and harm people across the region," said Mr. Douglas.

The conference brought together over 120 senior officials from several UN development agencies, the UN Economic and Social Commission for Asia and the Pacific, UNODC, the ASEAN Secretariat, ASEAN parliamentarians, diplomatic missions, governments from across Asia and the Asian Development Bank. Experts met to discuss regional integration plans, transnational crime threats and challenges that are expected to accelerate, and the necessary responses to these threats.

Press release of the event