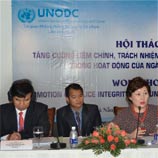 20 October 2014 -UNODC and the Vietnamese Ministry of Public Security (MPS) recently organized the first police integrity workshop in Viet Nam, where experts from different countries and officials from several national ministries met to discuss ways to address corruption within law enforcement in the country. "An effective, professional and accountable law enforcement and justice system is a fundamental component of the rule of law and good governance, and of effective protection of human rights," said UNODC Representative in Viet Nam Zhuldyz Akisheva at the event's opening.

The workshop responded to a growing public awareness of how corruption and abuse of power pervades Vietnamese society, including the police. It reflected an increased Government resolve to address it. During the meeting, participants underlined the need for a system which inculcates values such as integrity, accountability and transparency to all police officers. Additionally, experts analysed approaches taken in other Asia Pacific countries such as the establishment of a values-based culture, a corporate Code of Conduct, and rigorous oversight and integrity management with checks and balances to keep officers accountable.

UNODC is already assisting in the development of a professional code of conduct for the MPS anti-corruption branch as part of broader UNODC support to the Government to strengthen the accountability of public officials, including in law enforcement and judicial institutions. These actions are in line with the requirements of the UN Convention against Corruption (UNCAC).

Senior MPS Lieutenant General Hieu told workshop participants that his Ministry was committed to developing a law enforcement body built on integrity, and agreed that a number of international initiatives could gain traction in Viet Nam. In particular, local police officers could benefit from better education opportunities and working conditions. Other measures include a strengthened legal framework, an enhanced public complaints process and oversight of police for better transparency. "I personally believe this is a vitally important workshop which gives us an opportunity to share our criteria, standards and international experience in enhancing integrity, accountability and transparency. This is an important component in limiting mistakes, negativity and corruption in the activities of law enforcement agencies."

Such workshops are one of the important steps developed by UNODC to support countries in the implementation of the rule of law and the development of criminal justice reform. It aims to assist countries in their efforts to develop effective systems of oversight and accountability within their law enforcement authorities and enhance police integrity.

UNODC tools and publications on crime prevention and criminal justice