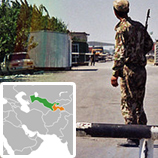 30 September 2014 - To address the trafficking of narcotics throughout Central Asia, the first two in a series of planned border posts were recently opened between Uzbekistan and Tajikistan. The facilities - called Border Liaison Offices (BLO) - will allow for direct communication between the countries' border control agencies and help stem the flow of illegal drugs.

Border control agencies in Central Asia are often ill-equipped to identify and stop the illegal movements of people, narcotic drugs and migrants in a comprehensive manner. The capacity of each country's law enforcement agencies also varies considerably, and most border agencies lack clear mechanisms for law enforcement information sharing.

The BLOs fall under a UNODC-supported project in the region to counter narcotics trafficking and are a key response to achieve cross-border communication and coordination in the region. UNODC supports the creation of these liaison offices through the training of border control officers and by establishing intelligence-sharing and communications mechanisms between countries.

Regional and inter-regional cooperation initiatives such as these are crucial to stemming the flow of opiates out of Afghanistan and fostering stability in Central Asia. UNODC's latest figures show that Afghanistan currently supplies some 93 per cent of the world's opium.