15 December 2015 - Opium poppy cultivation in the Golden Triangle stabilized in 2015 at 55,000 hectares (ha) in Myanmar, and 5,700 ha in the Lao People's Democratic Republic (PDR), according to the Southeast Asia Opium Survey 2015 released today by UNODC.

The survey shows that Myanmar remains Southeast Asia's top opium producer - and the world's second largest after Afghanistan. Together, Myanmar and Lao PDR produced between 731 metric tons (mt) and 823 mt of opium, most of which - using the smuggled precursor chemical acetic anhydride - was refined into the equivalent of roughly 73.1 mt to 82.3 mt of street-quality heroin for regional and international drug markets.

"The production of opium and two-way trade of chemicals going in and heroin coming out of the Golden Triangle remains a clear challenge to the rule of law and stability of producing areas," said Jeremy Douglas, UNODC Regional Representative for Southeast Asia and the Pacific. "The region's demand for heroin remains at unacceptably high levels and transnational organized crime groups are making huge profits. And while the stabilization of poppy cultivation in the past year is encouraging, the Government-elect of Myanmar and the Government of Lao PDR have no choice but to face the underlying issues that allow opium cultivation and related trafficking to continue."

Shan State in the north of Myanmar, which hosts a number of conflict areas and ceasefire groups, remains the centre of the country's opium and heroin trade, accounting for 91 per cent of opium poppy cultivation in the Golden Triangle. In Lao PDR, cultivation is found in the seven northern provinces of Phongsali, Houaphan, Louang Namtha, Louangphrabang, Oudomxai, Bokeo and Xiangkhoang. 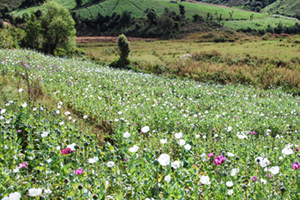 Socioeconomic surveys of farmers in poppy-growing villages have found that money generated from poppy cultivation is essential for villagers threatened with food insecurity and poverty. "The connection between poppy cultivation and poverty, difficult living conditions, household debt, and a lack of alternative sources of income is clear," said Tun Nay Soe, coordinator of UNODC's SMART (Synthetics Monitoring: Analyses, Reporting and Trends) Programme in Southeast Asia. "Opium poppy is cultivated because it provides a means of subsistence in the face of poverty."

Mr. Douglas also warned that the opium and heroin business threatens well-intentioned regional development plans. "The Golden Triangle is the geographic centre of the Greater Mekong Sub-region. Plans to expand transport connections and relax trade and border controls, including around opium producing areas, are either on the table or underway," Mr. Douglas said. "The organized crime networks that benefit from Southeast Asia's illicit drug trade are very well positioned to grow their business alongside these rapid changes. Both Myanmar and Lao PDR need support to turn the situation around."