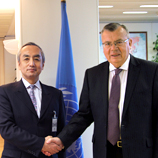 In the action plan, UNODC and Japan pledged to enhance regional cooperation in Africa as well as in Southeast Asia, including Myanmar, and Afghanistan and neighbouring countries. The plan, which was signed in 2013 following the Fifth Tokyo International Conference on African Development (TICAD V), also identifies priority areas of cooperation, including terrorism, trafficking in drugs, human trafficking and cybercrime.

"The joint plan of action has further enhanced the strong cooperation between the United Nations Office on Drugs and Crime and the Government of Japan in addressing the challenges of drugs and crime around the globe," said Mr. Fedotov, following the meeting with Mr. Hiramatsu and other officials on 16 January.

"I welcome this initiative and hope we can continue with the practice of an annual review to help ensure that are our responses are as effective as possible."

The Executive Director added: "This review enabled us to assess the results of the joint action plan, in areas ranging from counter-terrorism and counter-narcotics to border control and addressing cybercrime. It also provided an important opportunity to explore further avenues of cooperation, including to strengthen crime prevention and criminal justice action against challenges such as human trafficking and violence against women."

Plan of action for strategic cooperation between Japan and UNODC