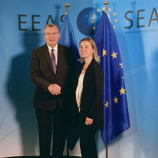 16 July 2015 - After meeting with the High Representative of the European Union on Foreign Affairs and Security Policy, Federica Mogherini, the UNODC Executive Director, Yury Fedotov, underscored the EU's importance as a longstanding ally in global efforts against drugs, crime, corruption and terrorism.

Describing the talks as both valuable and productive, Mr. Fedotov said he stressed the need to confront migrant smuggling in the Mediterranean and elsewhere by staunchly protecting the victims, and by maximising use of the UN Convention against Transnational Organized Crime and its protocol on smuggling of migrants.

He said UNODC had developed a strategy that coordinated efforts with regional and international initiatives and enabled joint action against the smugglers.

Mr. Fedotov also said he warmly welcomed the recent agreement of the EU to provide funding to UNODC to combat human trafficking and migrant smuggling.

"The smuggling of migrants is a 21st century tragedy. Given the high number of deaths, it is essential that we end this crime and provide victims with much needed support and assistance. A person's desperate desire for a better life should not end in a cruel death, " he said.

The UNODC Chief also highlighted the need to address the critical issue of foreign terrorist fighters, who pose a deadly threat to home nations, and transit and destination countries. Mr. Fedotov said UNODC was working hard to promote inter-regional cooperation and had launched a comprehensive initiative to address the growing nexus between terrorism and organized crime.
He noted UNODC was running anti-money laundering projects and had promoted an initiative establishing inter-regional networks designed to curb the damaging activities of transnational organized crime.