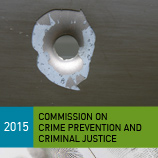 19 May 2015 - The growing involvement of individuals as Foreign Terrorist Fighters (FTF) both in armed conflicts and in terrorist activities represents an increasingly dangerous threat to international peace and security. While not a new occurrence, the extent of the involvement of FTF in conflicts and acts of terrorism today is unparalleled. With terrorist groups such as Al-Qaida, ISIL and the Al-Nusra Front all recruiting foreign nationals, the threat posed by terrorism now encapsulates not just end-target countries, but also countries of origin and transit.

The threat of individuals travelling to conflict zones, becoming further radicalized, receiving combat training, participating in terrorist activities and then returning to their home countries with the aim of carrying out terrorist acts, is more serious than ever. It is essential, therefore, that the international community works together to ensure that all States have the legal and operational tools to effectively combat the threat posed by foreign fighters.

At a special event on the margin of the 24th Crime Commission, panellists discussed suitable responses to FTFs. As part of these efforts, UNODC recently launched a global initiative to strengthen judicial efforts against terrorist recruitment, incitement to terrorism, terrorism financing, and terrorist training, among other activities.

At the event's opening, UNODC Executive Director Yury Fedotov noted that the Office assists countries in strengthening their criminal justice systems and enhancing international cooperation to address the transnational dimension of the FTF phenomenon. Some of the challenges to confront include incitement to terrorism, as well as terrorist recruitment, financing and training. "In this way we can seek to disrupt terrorist plans and operations before they happen."

The five-year UNODC initiative helps countries by enhancing their laws in compliance with the rule of law, and by developing the capacity of their justice officials to address the FTF phenomenon. Participants and presenters at the Crime Commission event, including senior officials from Member States and international and regional organizations, discussed the various issues and challenges in this area, as well as good practices and legal developments that some countries have adopted or undertaken to address this threat.