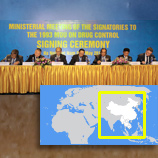 21 May 2015 - Ministers and senior officials from the six countries of the Mekong river region, which includes Cambodia , China, Lao PDR, Myanmar, Thailand and Viet Nam, together with UNODC, convened to endorse a new strategy to combat the growing and evolving drug threat to the region.

As the latest data shows, the flow of illicit drugs and precursor chemicals continues to increase and threaten the Mekong sub-region. Production and trafficking of methamphetamine and heroin within and from the region alone are generating a conservatively estimated annual value of over $31 billion for organized crime groups.

Synthetic drugs, particularly methamphetamine, remain the largest drug threat, with all Mekong countries reporting growing use and supply. The emergence of new non-controlled psychoactive synthetic drugs is also starting to have an impact. The illicit cultivation of opium and related production of heroin remains an additional major concern. The annual UNODC opium survey estimates show that opium cultivation in the Golden Triangle area of Myanmar and Lao PDR has tripled since 2006 to an estimated 762 tons of opium and 76 tons of heroin as of 2014, making the area second only to Afghanistan in the production of this substance.

At the signing ceremony in Hanoi, Viet Nam, UNODC Representative for Southeast Asia and the Pacific, Jeremy Douglas, noted that the Mekong Sub-regional Action Plan provides an ideal platform to address operational challenges related to the production and trade in drugs and precursor chemicals. "The countries themselves own the process, and the new action-oriented nature of the Action Plan will provide vital support for improvements to institutional and operational capacities. The countries share a sense of urgency to take action and work together."

The Mekong Sub-regional Action Plan addresses the drug threat through increased efforts and strengthened cooperation in key areas such as law enforcement, including border management; legal and judicial matters; drug use and health; and alternative development. The regional approach includes an implementation plan with clearly defined objectives and initiatives. At the meeting, country officials and UNODC representatives exchanged views with diplomats and international partners on how best to deal with the regional drug challenge and the impact on the countries of the Mekong region.