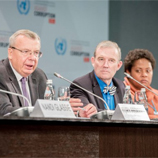 The Executive Director of UNODC, Yury Fedotov, in his own opening address, said, "UNODC, as guardian of the UN Convention against Corruption, remains committed to working with all our partners in the fight against corruption."

Mr. Fedotov informed the audience that promotion of partnerships was particularly important to assist the new development agenda and Goal 16, which called for substantial reductions in corruption and bribery and promoted justice and accountable institutions.

In discussing the role of Pacific countries in fighting corruption Mr. Fedotov noted that GOPAC continued to be a key partner in the UN Pacific Regional Anti-Corruption (UN-PRAC) Project.

"Together with GOPAC, the Project has successfully worked with parliamentarians to foster a shared appreciation of corruption risks and impacts, as well as to establish means for seeking joint solutions, including through the creation of GOPAC Chapters and the Standing Committee on Anti-Corruption," said the UNODC Chief.

More than 1,000 people are attending COSP6. The UN Convention against Corruption is the only legally binding universal anti-corruption instrument and was adopted in 2003. Every two years the States Parties to the Convention meet to review implementation of the Convention and discuss how States can better tackle corruption.