Women make tremendous contributions to the world, but violence, discrimination hold them back 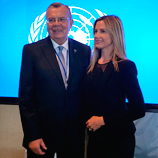 01 October 2015 - Of all the facts contained in UNODC's latest  Global Study on Homicide there is one chilling statistic that leaps out at the reader: Of the 93,000 female homicides globally in 2012, 42,600 were killed by their intimate partners and other family members.

Many women and young girls experience threats, violence, including acts of sexual violence, and discrimination in their daily lives. As women attempt to overcome these problems, justice is often hindered by the bias ingrained within some criminal justice systems.

A UNODC study, published in 2014, on strengthening responses to violence against women found that only 160 countries have passed laws confronting this violence. The laws often failed to hold perpetrators to account. Instead, perpetrators were found guilty of lesser crimes or handed down lighter sentences.

As the former Executive Director of UN-Women, Michelle Bachelet, has said, "Women are often offended twice; first when they are victims of violence, and second when they seek and do not find the justice and services they are entitled to..."

Given the scale of these problems and the impact on women's lives, the United Nations is working hard to address the problem.

Last Friday, the world  17 global goals that replace the millennium development goals. Goal 5 on gender equality calls for the elimination of all forms of violence and the end of discrimination against women and girls.

Reinforcing this message, an event held on 30 September on the margins of the United Nations General Assembly in New York, drew notable speakers to discuss the role of women in crime prevention and criminal justice. The high level event on Women, Crime prevention, Criminal Justice and Post 2015 Development Agenda was organized by Qatar, Italy and Thailand with UNODC's assistance, and chaired by UNODC Chief Yury Fedotov.

The President of the General Assembly, Mogens Lykketoft, informed the audience that the United Nations and its Member States are working to overcome violence and discrimination, and ensuring that the voices of women are heard loudly and clearly. He said there was a need "to move from goals to change, we need to see clear, decisive and committed action by all countries and actors… this means building a culture of rule of law that embraces young people."

Mr. Fedotov used his address to call for a discussion on how to stop the exploitation and violence that continue to blight so many women's lives all over the world, and to ensure that our criminal justice policies and institutions benefit from the insights and contributions of women to the fullest extent possible."

In his closing remarks, Mr. Fedotov said, the event was neither the beginning nor the end of this important dialogue. He stressed the need for further opportunities to hold robust discussion on how criminal justice policies and institutions can "better reflect the invaluable contributions and needs of women."

The 13th Crime Congress, held in Qatar in April, adopted the Doha Declaration on integrating crime prevention and criminal justice into the wider United Nations agenda. One of the declaration's specific goals was to mainstream a gender perspective into criminal justice systems and promote the full protection of women and girls from acts of violence.