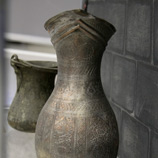 28 September 2015 - The "Protecting Cultural Heritage - An Imperative for Humanity" initiative was presented yesterday (27 September) by the Ministers of Foreign Affairs of Italy and Jordan with the participation of principals from UNODC, UNESCO and INTERPOL as well as ministers from a number of UN Member States on the sidelines of the 70th Session of the UN General Assembly.

The main goal of the programme is to follow up on resolutions and decisions adopted by the UN Security Council, the UN General Assembly and other international bodies.

Throughout the last decade, the world has witnessed a sharp increase in terrorist attacks on, and destruction of, the cultural heritage of countries affected by armed conflict, as well as organized looting, illicit trafficking and sale of cultural objects on an unprecedented scale.

Terrorist groups are using these acts as a tactic of war to intimidate populations and governments. In addition, these acts aim to generate income for terrorist groups across the Middle East and beyond, which is then used to support their recruitment and operational efforts.

Rallying partners to enhance the protection of cultural heritage, Paolo Gentiloni, Minister of Foreign Affairs and International Cooperation of Italy, said: "Cultural heritage is a reflection of human history, civilization and the coexistence of multiple peoples and their ways of life. Its protection is a shared responsibility of the international community, in the interest of future generations."

"The religious and cultural heritage of the Middle East, the birthplace of civilization and religions, belongs to all humanity," said Nasser Judeh, Deputy Prime Minister and Minister of Foreign Affairs of Jordan, who appealed to the high-level participants to "protect and preserve it as it is the collective responsibility of the international community".

Advocating for increased political commitment, Irina Bokova, Director General of UNESCO said: "Culture is on the frontline of conflict - we must place it at the heart of peacebuilding."
Mireille Ballestrazzi, President of INTERPOL - the world's largest police organization - stressed the need "to combine our efforts and resources to efficiently curb this criminal phenomenon and protect the world's cultural heritage for future generations".

UNODC Executive Director, Yury Fedotov, emphasized the importance of joining efforts in addressing the issue of the trafficking and the destruction of cultural property as "crimes that strike at the very core of our civilization and heritage".

The launch comes just one day after the announcement by the International Criminal Court of the surrender and transfer by Niger authorities of the first suspect in the Mali investigation: "Intentional attacks against historic monuments and buildings dedicated to religion are grave crimes".

Ahmad Al Faqi Al Mahdi, also known as 'Abou Tourab' - a member of the self-proclaimed 'Ansar Dine' armed group - is accused of allegedly committing the war crime of intentionally directing attacks against 10 buildings dedicated to religion and historic monuments in the ancient city of Timbuktu.

The Protecting Cultural Heritage initiative is a project open to all Member States, international organizations and partners wishing to join forces in support of the protection of cultural heritage from destruction and/or illicit trafficking.

This new initiative seeks to strengthen the Global Coalition for the protection of heritage launched earlier this year during the World Heritage Committee in Bonn (Germany). In order to raise awareness and multiply actions to counter this threat, the social media campaign #unite4heritage will also be enhanced. Join the conversation. The public is also invited to join the discussion on heritage and organized crime at #ProtectHeritage.