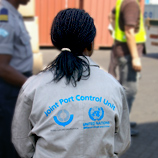 16 September 2015 - Each year an estimated 650 million container movements, accounting for some 90 per cent of the world's cargo, take place globally. The large volume of containers, and the speed of handling them, is a challenge to the law enforcement agencies trying to identify illicit shipments in this supply chain. The UNODC-World Customs Organization (WCO) Container Control Programme was established to tackle shipments of illegal goods - such as drugs, weapons and others - by pooling the strengths of customs and other law enforcement bodies.

Recently, the CCP launched its Women's Network Initiative at a meeting in Vienna, in order to enhance the professionalism and core leadership of female officials at the country level, and thus to increase women's participation in the Programme. The meeting brought together CCP staff - including two national female officers from the CCP Port Control Unit in Durres, Albania, and women CCP Coordinators for South Eastern Europe, the Middle East, North and West Africa - to discuss how to implement the Women's Network within a culturally sensitive framework.

At present, women account for approximately 11 per cent of the CCP's Port Control Unit (PCU) officers. In some countries there are no women PCU officials, while in West Africa 22 per cent of PCU members are women. Traditionally, law enforcement is a male dominated profession and this new initiative aims to address gender stereotypes that limit women and deprive programmes such as the CCP of valuable talent.

Among the actions to be considered are:

At present, the CCP is operational in 28 countries and has initiated activities in a further 25. Since its inception, the Programme has established more than 40 Port Control Units, leading to significantly increased detections and confiscation of drugs and other illicit goods.