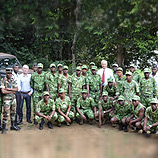 15 April 2016 - UNODC's Global Programme to combat wildlife crime is making significant headway in Gabon with programme operations ready to be formally handed over to the Agence Nationale des Parcs Nationaux (the country's national parks agency). The aim with this handover is to enhance investigation strategies and improve the gathering of intelligence around wildlife and forest crime and is the first of its kind in the central African country.

UNODC experts have equipped and trained teams of rangers and implemented a system for the acquisition, storage and analysis of criminal intelligence. Additionally, UNODC helped train 60 eco-guards at a military camp near the park de La Lopé- the first area in Gabon to receive protected status.

Gabon is a forested country with a relatively small population in central Africa. The country has a significant number of natural assets in terms of petroleum, forest and wildlife, thus it is under constant threat of transnational organized crime groups which aim to profit from its valuable resources. Criminal groups are decimating the local species of flora and fauna with Gabon's elephants taking the brunt of this illicit trade; killed in large numbers for their lucrative ivory. While the local Government is committed to addressing these criminal activities, the judicial mechanisms in the country need further enhancing to enable them to deal with the increasing scale of the problem.

Referring to the specific goals of the programme in Gabon, and the operations team composition, UNODC's Senior Advisor in security issues for the country, Denis Spinhirny stated that "the Intel cell and its two trained criminal analysts will help facilitate the identification of national and international poacher networks. This new method of criminal analysis is unique in central Africa."

UNODC has supported the implementation of the Global Programme for Combating Wildlife and Forest Crime (WLFC) in Gabon since November 2014. The ICCWC Toolkit analysis highlighted the need to improve investigation and intelligence gathering, and the initiative continues its work to support the government of Gabon to strengthen their capacities in this regard. The successes of this programme, with its specific method of mentoring and capacity building, is a valuable aid to any country seeking to combat WLFC.