UNODC Chief: International Drug Policy Is Not An End, It Is The Means To Put People First 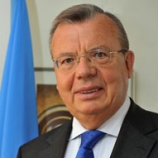 8 April 2016 - Former British Prime Minister Margaret Thatcher once famously said that consensus was "the process of abandoning all beliefs." I beg to disagree.

Recently, I sat in a packed Vienna auditorium in the early hours of the morning as countries raced against the clock to reach agreement on an outcome document on drug policy.

The document now goes to the UN General Assembly Special Session on the world drug problem-UNGASS-in New York in April.

Before the Vienna meeting, a series of other events were held in international capitols involving scientists, academia, other organizations, as well as civil society. The overall process, driven by countries, was open, transparent and inclusive in embracing experiences and lessons learned.

Given the different histories, cultures and traditions of countries, reaching agreement on such documents was never an easy proposition. But the United Nations has always striven to build accord and amity.

It is necessary. There are around 27 million individuals in the world dependent on the drugs they use. This includes 12 million people who inject drugs. Elsewhere, the challenges are equally severe.

Opium production in Afghanistan creates serious problems not just for West and Central Asia, but across the world. Deadly new psychoactive substances, the ravages of cheap heroin in North America, increased cocaine consumption in West and East Africa, show there are more hotspots than bright spots globally.

Then there is the pervasive violence associated with illicit drugs that bludgeons countries and communities, especially in Central America. Possible links between criminals, including drug traffickers, and terrorists are also the cause of growing anxiety.

Produced over several months of high level negotiations and broad discussion, the outcome document is the best attempt to craft solutions to these dramatic problems. In doing so, it seeks to turn fine words into bold operations that can impact lives for the better.

The document stresses that the international drug control conventions have the necessary flexibility to confront the challenges of drug use and abuse.

What does this mean in practical terms. It means exploring alternatives to incarceration for minor offences of possession, and ensuring access to drugs for medical purposes.

Just as importantly it promotes health, including efforts against HIV, within a comprehensive and balanced approach that also enhances law enforcement to deal with the illicit drug supply.

Behind the document, however, lies a much deeper purpose: an acknowledgement that our policies support people and communities. That we must put people first.

Conference room negotiations are not the end, they are the means. The UNGASS process is strongly connected to the real lives of people. We should not lose sight of this fact.

One of the key principles of the international drug control conventions is the need for shared responsibility. No country can solve this problem alone, no country can exempt itself from the search for solutions.

The outcome document to be presented in New York is directly linked to this principle; it is a statement that, while it is difficult to please everyone, promotes cooperation and partnership. The world can benefit from such unanimity.

Consensus may not be pretty, but it is the best way of progressing against a global threat that desperately needs unity of action.

Join the conversation on Twitter by using the hashtag  #UNGASS2016  and follow  @UNODC  and @YuryFedotov  for updates on this event.

Side events during UNGASS 2016