Kenya: 'Hands up' to tackle HIV/AIDS 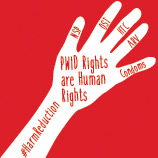 1 December 2016 - Scaling-up comprehensive, evidence and rights-based HIV programming for people who use and inject drugs is an integral part of this year's commitments to action agreed at the United Nations General Assembly Special Session on the World Drug Problem and the High-Level Meeting on ending AIDS by 2030.

Often referred to as harm reduction services for HIV, the United Nations recommends a set of nine interventions known to have an impact - among them the first four, which are the most effective: needle and syringe programmes (NSPs), Opioid Substitution Therapy (OST, also known as Medically Assisted Therapy - MAT), HIV testing and counselling (HTC), and Antiretroviral Therapy (ART).

An example of delivery of these services addressing HIV can be found in Kenya - a country with an 18.3 per cent HIV prevalence. In 2013, some 18,000 people who inject drugs (PWID) in the country required HIV combination-prevention interventions to achieve a significant reduction of new infections, HIV related mortality, and stigma by 2019 - some of the key objectives included in the Kenya AIDS Strategic Framework (KASF).

In 2014, with the support of the United States President's Emergency Plan for AIDS Relief (PEPFAR), and technical assistance from UNODC and other key stakeholders, Kenya embarked on one of the most comprehensive harm reduction and combination-prevention programmes for PWID in Africa. The large-scale implementation of such programmes required close collaboration and coordination at all levels. By 2016, all core interventions mentioned above are being offered to clients at no cost, and every day a network of three OST/MAT clinics in target counties in Nairobi and coastal regions reaches more than 1600 people who use drugs (PWUD).

Furthermore, services beyond what is included in the essential package of HIV assistance are now available in the country through clinic service points, Drop-in Centres (DIC) and outreach workers. Different stakeholders such as law enforcement officials, prison authorities, the judiciary, the media, religious leaders, and the private sector were engaged to create an enabling environment for the programme and to better address the needs of PWUD. For their part, country-wide civil society organizations (CSOs) - including the Kenya Network of People who Use Drugs (KENPUD), and the Kenyan Harm Reduction Network (KHRN) - contributed to this effort as well.

Malindi's OST/MAT clinic was the first to offer services to clients in the coastal regions in February 2015. Today, trained professionals including doctors, clinical officers, nurses, social workers, pharmacists and CSO staff, see over 500 clients daily. Screening for HIV, hepatitis B and C, tuberculosis, sexually transmitted infections, and other services for associated illnesses are offered, and referrals to specialized services are available.

This programme in Kenya is one of the many activities UNODC undertakes to address HIV/AIDS issues globally. The UNODC HIV programme work is guided by specific declarations, resolutions and decisions adopted by the General Assembly, the Economic and Social Council, the Commission on Narcotic Drugs, the Commission on Crime Prevention and Criminal Justice, and the UNAIDS Programme Coordinating Board. This work is aligned with the UNODC Strategic Framework 2016-2017, the UNAIDS Fast-Track Strategy 2016-2021 and the Sustainable Development Goals as well as with new commitments and mandates to support Member States, including the Outcome Document of the April 2016 General Assembly Special Session on the World Drug Problem.

High-Level Meeting on ending AIDS by 2030