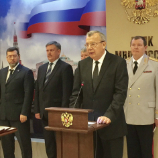 5 December 2016 - Regional cooperation is essential to address the challenges of drugs and transnational organized crime, UNODC Chief Yury Fedotov said today at an event in Domodedovo, near Moscow.

In his remarks, Mr. Fedotov said: "It is an honour to be here to celebrate this long-standing cooperation between UNODC, the Russian Federation, Japan and Afghanistan, which is helping to confront a major threat to security, development and health."

Mr. Fedotov was speaking at a graduation ceremony of an advanced training course to improve the capacity of the police forces of Afghanistan and Central Asian countries to tackle drug trafficking.

Known as the "Domodedovo Project," after the academy where the training takes place, the project is designed to improve the operational capacity of the Afghan counter narcotics police to combat the movement of illicit drugs. The training is delivered under the umbrella of UNODC's Regional Programme for Afghanistan and Neighbouring Countries.

Mr. Fedotov said: "The Domodedovo project is a great example of the shared responsibility that the international community so urgently needs. I would like to offer my sincere thanks to the project donors, Japan and the Russian Federation, for their commitment and generosity."

In late October, UNODC's Afghanistan Opium Survey showed a "worrying reversal" in the efforts to combat the problem of illicit drugs in the country. Based on the report's findings total area under opium poppy cultivation increased 10 per cent from 183,000 ha in 2015 to 201,000 ha this year.

Poppy cultivation is expanding in the north and west, and the number of poppy free provinces has fallen from 14 to 13 in 2016. Eradication dropped precipitously to 355 ha - a fall of some 91 per cent. The average opium yield has also grown by 30 per cent leading to a corresponding rise in opium production of 43 per cent or 4,800 tons.

In a statement issued at the time of the report's release, Mr. Fedotov said of Afghanistan: "The truth is we cannot afford to turn our back on this hard pressed nation, which can do so much to help reduce the global misery and suffering caused by opium and heroin."

Statement of the UNODC Executive Director, Yury Fedotov, on the launch of the Afghan Opium Survey 2016