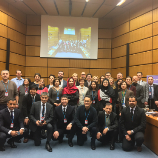 5 December 2016 - In order to reduce opioid overdose deaths, the World Health Organization (WHO) recently recommended in its Community Management of Opioid Overdose Guidelines (2014) that the opioid antidote naloxone, as well as training in opioid overdose management, should be made available to people likely to witness an overdose, such as health professionals, police, people who use opioids, their families and peers.

In response to this, over the next two days UNODC and WHO are organizing a meeting which aims to develop and discuss a draft Study Protocol on the feasibility of such approach to opioid overdose. The Technical Meeting comes in response to the Commission on Narcotic Drugs (CND) resolution on "Promoting measures to prevent drug overdose, in particular opioid overdose" and the Outcome Document of the 2016 UNGASS on the World Drug Problem and following field assessment missions in Central Asia and Eastern Europe.

Naloxone (n-allylnoroxymorphone) has been used in opioid overdose management for over 40 years with minimal adverse effects beyond the induction of opioid withdrawal symptoms, and it can be administered by a variety of routes, including intravenously, intramuscularly, subcutaneously and intranasally.

The draft Study Protocol outlines the rationale and procedures, as well as the suggested outcome measures, for a joint UNODC/WHO supported multi-site feasibility study on the comprehensive management of opioid overdose in the community. A specific emphasis of the study will be to assess the feasibility of increasing the availability of naloxone including intranasal naloxone formulations in different sites for the community management of opioid overdose.

This week's meeting is organized within the framework of a UNODC/WHO joint Programme on Drug Dependence Treatment and Care, which aims to promote and support worldwide evidence-based and ethical treatment policies, strategies and interventions -with a particular focus on low and middle-income countries - to reduce the health and social burden caused by drug use and dependence. Its overall goal is to better estimate the public health impact of the community management of opioid overdose prevention, including the use of intranasal naloxone formulations. The implementation of the protocol is open to countries (or scientific groups within countries) that wish to join this multi-country study with their resources.