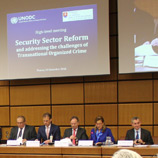 14 December 2016 - Aiming to enhance international collaboration against transnational organized crime (TOC) in the work on Security Sector Reform (SSR), UNODC - together with the Permanent Mission of the Slovakia to the International Organizations in Vienna - recently hosted a high-level event in Vienna on this topic. The discussion is a follow-up to the launch of the Integrated Technical Guidance Note (ITGN) on SSR and TOC, which took place during the 25th Session of the Commission on Crime Prevention and Criminal Justice last May in Vienna.

The document is a collaborative work of a wide range of actors from within the United Nations (UN) System, namely the UN Interagency Task Force on SSR which is led by the Department of Peacekeeping Operations. The guidance note highlights the impact of TOC on security and stability, and presents an approach for including TOC counter measures into SSR processes. The note contains technical measures to counter TOC, in line with the UN Convention against Transnational Organised Crime and its three Protocols. Furthermore, the document addresses long term institution building and includes preventative measures in order to strengthen security governance, the rule of law and human rights.

During the discussion, UNODC Deputy Executive Director, Aldo Lale Demoz, highlighted the need for his Office to work collaboratively with the international community, in particular with OSCE and the EU, and to join forces in this area to build the capacity and deliver specialized training to security sector practitioners. He stressed that "a joint security development human rights approach is essential, and modern threats cannot be met with traditional responses. Insecurity is rampant vis-a-vis global crises, and we are facing a global transition which requires joint efforts, courage and decisive actions and measures to protect human rights."

The Organization for Security and Cooperation in Europe (OSCE) and the European Union (EU) presented their new policy frameworks on SSR. Best national practices were presented both at national and regional levels, such as the Kyrgyzstan Prison Reform Programme and the Sahel Integrated Programme on judicial reforms. Austria, host country of the UN in Vienna, also shared its experience and future perspectives on SSR. The gender perspective and its link to SSR was also addressed.

The Head of the EU Delegation to the UN in Vienna, Didier Lenoir, referred to the importance of SSR in Europe, and highlighted that European countries are directly affected by TOC. "TOC affects democracy, undermines States, and leads to insecurity and instability. National ownership, States' leadership and society engagement are key elements," he said. For his part, the Director of the Office of the OSCE Secretary General, Paul Bekkers, emphasized that the new OSCE guidelines assist in countering TOC and in fostering the rule of law.

Chairing the meeting, the Slovakian Ambassador to the International Organizations in Vienna, Olga Algayerova, called on Member States to establish a Group of Friends on SSR in Vienna, building on an existing group at UN headquarters in New York. Its aim would be to coordinate Vienna actions and implement the UN Security Council Resolution 2151 on SSR and promote the Sustainable Development Goals (SDGs), in particular Goal 16 regarding peaceful and inclusive societies, access to justice for all, and accountable and inclusive institutions at all levels.

25th Session of the Commission on Crime Prevention and Criminal Justice