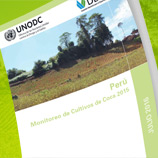 13 July 2016 - The latest Peru Coca Survey has been presented today in Lima, showing a decrease in the surface used for coca leaf crops of more than 6 per cent, or more than 2,500 hectares (ha) in 2015, when compared to 2014. The report, jointly produced by UNODC and the country's Government, indicates that the area used for cultivating the raw material for cocaine production fell from 42,900 hectares to 40,300 hectares.

Data contained in the survey shows that in 2015 the Peruvian Government reported 35,868 ha of eradication, 14.9 per cent more than in 2014. The areas most impacted by these eradication actions are Aguaytia, Alto Huallaga (including Monzón), Pichis-Palcazu-Pachitea, Bajo Amazonas and San Gabán. The Apurimac, Ene and Mantaro River Valleys (known for its Spanish acronym of VRAEM), which is the top coca producing area in in Peru, shows a decrease of 2.7 per cent in the coca leaf cultivated surface due to the implementation of a conversion plan conducted by the Ministry of Agriculture. This initiative comprises the voluntary eradication of coca leaf by local farmers and instead moving to licit crops.

An additional analysis contained in the survey focuses on addressing the extent of coca crops in national protected areas. In this period, 134 ha of coca crops in production have been detected on these areas, and more than 6,000 ha on their buffer zones. The Bahuaja Sonene National Park has been the most hard-hit by the cultivated surfaces of Inambari-Tambopata and San Gabán. The latter region has been doubly affected by coca crops, alongside illegal mining and related crimes linked to organized crime.

Production of sun-dried coca leaves in 2015, which are used by drug traffickers to produce coca paste and cocaine hydrochloride, stood at some 99,080 metric tons (MT). The VRAEM region accounted for 69 per cent of production, due in part to notable higher yields per hectare of 3.6 MT compared to the national average of 2.4. As in previous years, some 9,000 MT of the total production is used for the traditional practice of coca leaf chewing, according to official data.