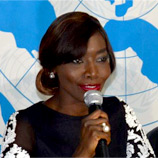 7 June 2016 - Trafficking in persons and smuggling of migrants continue to be challenges in West and Central Africa. Several factors have facilitated the expansion of these criminal activities: porous borders which can lead to political instability, or violent and endemic conflict. These can push vulnerable groups to embark on dangerous journeys, where organized crime groups can take advantage of them while generating millions of dollars in profits each year.

At her appointment ceremony, both Ms. Gawlo Seck and Pierre Lapaque, UNODC Regional Representative in West and Central Africa, brought attention to the plight of smuggled migrants and of victims of trafficking and exploitation, often subjected to forced labour in mines, sexual exploitation, forced begging, recruitment of children as soldiers.

On the reasons for appointing Ms. Gawlo Seck to her honorary position, Mr. Lapaque said: "Thousands of people are victims of trafficking and subject to smuggling in Senegal each year. Of the more than 50,000 talibés (children who attend Koranic schools called 'daaras') in Greater Dakar, over 30,000 of them are forced to beg as much as six hours per day. That is almost a regular working day. Known and respected personalities are well positioned to advocate on issues like these. Who could do this better than Coumba Gawlo?"

For her part, Ms. Gawlo Seck spoke about actions related to her assignment: "My mission is to educate leaders to promote protective legislation, and to educate young people about the risks related to the smuggling of migrants, which can turn out to be lethal. I will talk to young people in neighbourhoods and universities, and sensitize religious leaders. I also intend to involve my artist friends in these activities, as I have previously done in Haiti following the earthquake."

The presentation ceremony in Dakar was attended by members of the diplomatic and international communities - including Ambassadors from Canada, Germany, Great Britain, Italy, Japan, Morocco, and Niger, together with officials from UN organizations and the Ministry of Women, Children and Family.

As a backdrop to its Goodwill Ambassador's appointment, UNODC in the region has implemented the 2015-2020 UNODC Regional Strategy for Combating Trafficking in Persons and Smuggling of Migrants in West and Central Africa in support of the ECOWAS Regional Action Plan to Address the Growing Problem of Illicit Drug Trafficking, Organized Crime and Drug Abuse.

UN Integrated Strategy for the Sahel