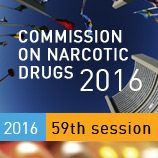 11 March 2016 - With a series of official meetings and side events on the global drug situation, the 59th Session of the Commission on Narcotic Drugs (CND) will be held between 14 and 22 March in Vienna, Austria.

This year's Session begins with a three-day segment (14-16 March) focused on preparing for the UN General Assembly Special Session on the World Drug Problem (UNGASS), to be held between 19 and 21 April 2016 in New York. In parallel with the Session, a Youth Forum will take place in which young delegates from Member States will deliver a joint statement to the CND and, subsequently, at the UNGASS.

Seventy-four side events are also planned for the 59th Session, with topics ranging from legislative responses to new psychoactive substances, to addressing tuberculosis and HIV and AIDS as a public health priority, and from alternative livelihoods to the use of the Darknet for drug trafficking.

The 59th Session brings together more than 1,500 attendees from Governments, parliaments, inter-governmental organizations, civil society and the private sector.

Join the conversation on Twitter by using the hashtags #CND2016 and #UNGASS2016 and follow @UNODC and @YuryFedotov for updates.

59th Session of the Commission on Narcotic Drugs