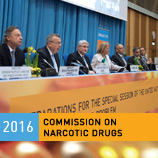 14 March 2016 - Speaking at the opening of the 59th Session of the Commission on Narcotic Drugs (CND) today, UNODC Executive Director Yury Fedotov said the CND's work, including preparations for the UN General Assembly Special Session on the World Drug Problem (UNGASS 2016), to be held in April this year, was promoting a comprehensive understanding of the world drug problem and the need to put people first. Crucially, the UNGASS 2016 process has focused on lives lost and the needless suffering caused by illicit drugs.

"Your deliberations here at the CND, and towards UNGASS 2016, can help to take further crucial steps forward to promote a healthier, safer and more prosperous future for all," said Mr. Fedotov. At the end of his speech, he said "…you can count on UNODC's support".

Earlier, the UNODC Chief noted that UNODC, as the lead entity in the UN System addressing the challenges of illicit drugs, was fully engaged in supporting countries through "balanced approaches, rooted in agreed frameworks and informed by UNODC's research, guidelines and extensive on-the-ground experience."

Mr. Fedotov's speech also acknowledged the many challenges such as production and trafficking from Afghanistan, the fragility of some regions, including West and East Africa, deadly violence in Central America, the unending proliferation of new psychoactive substances and the growing nexus between organized crime groups and violent extremists.

The UNODC Executive Director said that the debate had shone a light on the consideration of alternatives to conviction for minor drug related cases where appropriate. On the death penalty, Mr. Fedotov told the audience, "Its application for drug-related offences has never been in the letter or the spirit of the drug control conventions."

The 59th Session of the CND brings together around 1,500 delegates representing Member States, inter-governmental organizations, and civil society for a global discussion on the world drug problem. This year, the Commission will discuss 10 draft resolutions, and hold 74 side events and over 25 exhibitions.

Join the conversation on Twitter by using the hashtags #CND2016, #UNGASS2016 and follow @UNODC and @YuryFedotov for updates.