UNODC and Japan strengthen cooperation with eye on security and development, 2020 Crime Congress 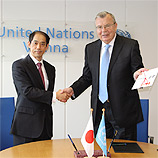 4 March 2016 - UNODC's Executive Director, Yury Fedotov, met today with the Permanent Representative of Japan to the United Nations in Vienna, Ambassador Mitsuru Kitano, to sign a new funding agreement worth some $16 million. The agreement is aimed at delivering several projects in various regions of the world to tackle illicit drugs and bolster preventing terrorism, as highlighted in the Doha Declaration, endorsed at the Thirteenth Congress on Crime Prevention and Criminal Justice in Qatar.

At the signing ceremony, Mr. Fedotov expressed UNODC's appreciation for the support provided by the Government of Japan in past years and for the upcoming period. In 2016, the country's supplementary budget contribution to UNODC of around $16 million - a 74 per cent increase compared to the previous year -will support several projects in West, North and East Africa, the Middle East as well as Afghanistan and neighbouring countries, among others. "With this joint plan of action we have taken another important step in UNODC and Japan's growing partnership. Japan is a key partner for our work and the plan will further stimulate us to do even more across our essential mandates of drugs, crime, corruption and terrorism. I once again thank the Japanese Government and I look forward to closer cooperation in the future."

Some of the efforts that the joint plan supports include capacity building work on terrorism prevention in a number of countries in Asia, the Middle East and Africa. Additionally, a joint project between UNODC, Japan and Russia delivers specialized counter narcotics training to Afghan police officers at the Domodedovo Training Centre in Moscow.

Speaking at the signing event, Ambassador Kitano said: "Terrorism continues to pose a major threat to international peace and security. The Doha Declaration underscores the importance of capacity building aimed at preventing and countering terrorism in all its forms and manifestations. This unprecedented contribution to UNODC's efforts in fighting against terrorism addresses our full commitment to a safer and more secure society as well as our initiative toward the 2020 Crime Congress in Japan."

The Doha Declaration, endorsed at the 13th Crime Congress, articulates a global commitment to crime prevention and criminal justice. It calls for the commitment by the international society for holistic and comprehensive approaches to countering crime, violence, corruption and terrorism in all their forms and manifestations, among others. Japan will host the next Crime Congress in 2020.

With the support provided, UNODC can also promote an integrated approach for the implementation of the Sustainable Development Goals (SDGs) at the global, regional, and national level as set forth in the 2030 Agenda. This UN-wide, long term strategy intends to transform the development paradigm to ensure that all aspects of development are considered, including security, justice, good governance and the rule of law - indicators which are enshrined in SDG 16.

Concluding the meeting, the Executive Director highlighted the critical importance of cooperation in meeting some of today's most challenging areas: "UNODC is ready and eager to work together with partners from all sectors to offer comprehensive and coherent support in implementing the 2030 Agenda."