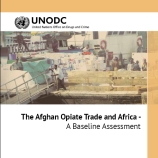 29 March 2016 - Released earlier this month by UNODC, the Afghan Opiate Trade and Africa - A Baseline Assessment 2016 sheds new light on the illicit Afghan opiate trafficking situation in Africa. The report offers a much needed evidence base to support policymakers and law enforcement officials in understanding the trafficking of Afghan opiates into and across Africa in order to help in the development of an effective and coordinated response.

11 per cent of the world's opiate users are estimated to be based in Africa, with more than 50 per cent of these found in West and Central Africa. Although cannabis remains the top illicit drug of consumption on the continent, there are signs of a burgeoning domestic demand for heroin - particularly in East Africa. While there is no evidence to suggest that heroin is produced in Africa itself, the continent rather acts as a transit ground for organized crime groups to traffic opiates onto more lucrative markets in Europe, North America and Asia.

The Baseline Assessment includes findings focused on each region. For example, East Africa is shown to be a major landing point for heroin shipped from Afghanistan via the Indian Ocean, although seizure rates remain low. On the other side of the continent, Western Africa, one of the poorest regions in the world, remains an established trafficking route between South America and Europe and is dominated by Nigerian crime groups.

Concerning the other regions, Northern Africa remains somewhat of an outlier and, since it is not on the southern route, is predominantly supplied by a sub-section of the Balkan route in Southeast Europe. In the South, Mozambique and South Africa are found to be major transhipment countries while the broader picture of how trafficking affects the region remains largely unknown.

The Baseline Assessment offers an accessible and user friendly overview of the Afghan opiate trade in Africa. The report highlights the limited information available on opiate prices and its purity, and on the structure of organized crime networks and their relation to international drug markets and other types of transnational organized crime such as trafficking in persons. This report provides an initial understanding of the Afghan opiate trade in Africa, around which future research and policy can be developed.