11 May 2016 - During a two-day mission to the Seychelles, Secretary-General Ban Ki-moon visited the Supreme Court Annex - an infrastructure project constructed by UNODC under the Office's Global Maritime Crime Programme (GMCP) which aims to carry out maritime piracy trials in the East Africa archipelago.

During a presentation to the Secretary-General and his delegation, the Head of the GMCP, Alan Cole, outlined a brief history of the Supreme Court Annex. Officially opened a year ago, the facility is an extension of the Palais de Justice - which houses the Supreme Court and the Court of Appeal - and provides case management equipment, video link technology and legal research resources for the Supreme Court. Mr. Cole further demonstrated the video link technology in Court 10 and gave accounts of the cases heard in this court since it was built. 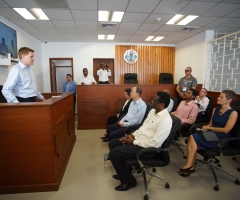 Speaking at the facility, Mr. Ban expressed his gratitude towards the countries which support and provide funds for such facilities. "I am very glad that we are working very closely with UNODC. There are a lot of other crimes such as drug and human trafficking which we have to address. All these issues should be carried out in alignment and in the context of sustainable development."

UNODC's Programme has supported the development of the piracy prosecution model in the Seychelles over the last five years, resulting in the country's judicial system trying 142 suspected pirates and convicting 138 of them, with five on remand awaiting trial. While the Appeal Court of Seychelles acquitted 17 of the convicted persons, UNODC has so far transferred 96 convicted pirates back to the Somali regions of Puntland and Somaliland to serve the rest of their sentences. UNODC also repatriated 29 Somalis after completing their sentences or getting an acquittal.

The new court building is part of an infrastructure project developed by GMCP in Seychelles with funding support from the United Kingdom, the Netherlands and the Trust Fund of the Contact Group on Piracy off the Coast of Somalia (CGPCS) at a cost of over $1.4 million.