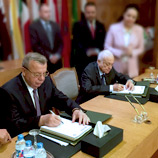 12 May 2016 - UNODC Executive Director, Yury Fedotov, reinforced the excellent cooperation existing between the organization and Egypt through bi-lateral meetings with high officials during his three-day mission to Cairo, this week.

On the first day of the mission, the second Regional Programme for the Arab States (2016-2021) was signed at a high profile event with the Secretary General of the League of Arab States, Dr. Nabil El-Araby.

With a proposed budget of $116 million, the regional programme addresses new threats and emerging challenges including the nexus between terrorism and transnational organised crime, illicit financial flows, smuggling of migrants, criminal justice and prison systems, as well as illicit drugs and HIV and AIDS.

In a productive meeting with Egypt's Minister of Justice, Hossam Abdel Rahim, the Minister sought to reinforce collaboration with UNODC in the areas of anti-corruption, asset recovery, mutual legal assistance and extradition of criminals. Mr. Fedotov reaffirmed his commitment to expand support on these fronts and he encouraged Egypt to pursue these issues in the second cycle of the UNCAC review process.

In the area of counter-terrorism, the UNODC head said the organization was ready to broaden existing cooperation with Egypt to strengthen criminal justice responses to terrorism and organised crime, including trafficking in cultural property as a source of financing terrorism.

He also said that UNODC would deepen ongoing cooperation to counter human trafficking and combat migrant smuggling, including training for prosecutors. The rights of trafficking victims and smuggled migrants was also strongly emphasised in the meeting.

The UNODC Executive Director has been a strong advocate of the need to both protect fundamental human rights, as well as pursue the criminals under UNODC's mandate. This includes using, to the greatest possible extent, the protocols on both these crimes under the UN Convention against Transnational Organized Crime.

"Human rights cannot be sacrificed because of fear. […] Criminals who make a business out of people's needs, hopes, and desperation must be stopped. If there is one lesson to be drawn from the past few years, it is that countries cannot solve these issues alone," said Mr. Fedotov afterwards.

He added that international cooperation and a coordinated response were needed to address the numerous challenges posed by a large influx of migrants, while protecting the human rights of those affected.

Earlier this year, UNODC and the EU launched a $12.4 million Global Action to prevent and address trafficking in persons and the smuggling of migrants. Both Morocco and Egypt are essential elements of this activity.

The Executive Director conveyed his condolences to the Minister of Interior, General Magdy Abdel Ghaffar, for the terrorist attack on 8 May which killed eight plainclothes Egyptian policemen in an ambush. He reaffirmed UNODC's commitment to support Egypt in its fight against terrorism. They both agreed on the need to promote international cooperation to counter organised crime networks and terrorist organisations undermining security in the region and beyond.

In talks with the Prosecutor General, Nabil Sadek, Mr. Fedotov stressed UNODC's ability to use its field expertise to build networks against crime, as well as promote collaboration and create comprehensive and innovative approaches to transnational crime.

The Middle East and North Africa has trading routes that have been active with legitimate trade for centuries, but traffickers also use these routes to move illicit goods.

Some of the world's drug trafficking routes move across the region. They include heroin from the East, which is cultivated in Afghanistan and trafficked through Pakistan, Iran and other neighbouring countries.

The popular drug tramadol arrives from South Asia and cannabis is produced in the region, along with captagon. Trafficking in arms represents another major threat to the security and stability of the region.

Mr Fedotov praised the efforts of the Minister of Social Solidarity, Dr.Ghada Waly, in promoting the rights of children in conflict with the law particularly at El Merg institute.

During the mission, the UNODC Executive Director also met with the Assistant Foreign Minister for Legal Affairs, Mahmoud Samy, and the Deputy Minister of Health of Population, Dr. Maisa Shawki, among other officials.

UNODC in the Middle East and North Africa