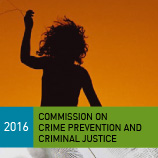 30 May 2016 - Coinciding with the 25th Session of the Commission on Crime Prevention and Criminal Justice (CCPCJ) that took place in Vienna last week, UNODC, together with the Governments of Canada, Norway, Qatar and Switzerland organized a special event on the challenges faced by a number of countries regarding the recruitment of children by terrorist groups, and to their treatment by the justice system.

The purpose of the event was to raise awareness on the phenomenon of children's association to violent extremist groups, while emphasising that children are often both victims of extremist violence and may be used by these groups to perpetrate serious offences, including acts of terrorism, war crimes or crimes against humanity. Furthermore, a UNODC project entitled 'Capacity Building on Justice and Security Challenges concerning Children Associated with Violent Extremist Groups, Including Terrorist Groups' was launched at the event, with emphasis being made on Member States' needs in this field, which would require substantial support from the international community.

"Ensuring that justice processes can not only promote accountability but also take into account the special needs and the level of development of children, fostering their sense of dignity and worth, and providing them with a real chance to assume a positive and constructive role in society is our primary objective", said UNODC Deputy Executive Director Aldo Lale-Demoz at the CCPCJ event.

For their part, representatives from Iraq, Lebanon and Niger explained the challenges their countries face regarding the recruitment and exploitation of children by ISIL, while mentioning the necessity to support the countries who are targeted. Specific issues affecting different regions were highlighted, such as cases where children are used to carry out terrorist attacks. Participants also discussed UNODC's activities in this area, together with the challenges of combining preventative and criminal justice responses, while also providing adequate accountability mechanisms to prevent impunity when the perpetrators of crimes are children.

In other interventions, the Ambassador of Switzerland introduced a 'Draft Memorandum of Good Practices on Juvenile Justice in Counter-Terrorism Contexts', which was developed within the framework of the Global Counter-Terrorism Forum. For his part, the Ambassador of Qatar's participation drew attention to the recent Doha Declaration and the work of UNODC in its implementation. The Ambassador of Norway strongly encouraged UNODC to develop a position paper on how Member States should treat children associated with violent extremist groups, including terrorist groups, as this could provide pointed guidance to countries on how to tackle this new phenomenon.

The event provided a much-needed platform to encourage joint action and effective responses through the identification of good practices, and underlined the need for a collective response and more extensive cross-border cooperation.

UNODC's work on justice for children

25th Session of the Commission on Crime Prevention and Criminal Justice

Programme of side events during the 25th Crime Commission