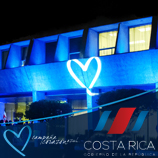 18 November 2016 - Costa Rica has become the latest country to join the Blue Heart Campaign against Human Trafficking. With millions of victims of human trafficking across the globe, the UNODC-led campaign aims to mobilize governments, civil society organizations, media and the private sector to expose and combat this serious crime.

The Government of Costa Rica, led by its President, Luis Guillermo Solís, together with the Canadian Embassy in Costa Rica and UNODC's office in Central America and the Caribbean, launched the Blue Heart Campaign against Trafficking in Persons in the country.

The event, which took place at the Presidential House, was attended by Government officials, members of the diplomatic corps, directors of the academia and cultural institutions, and representatives of civil society and the private sector. All attendants were invited to sign the Blue Heart Pact as their individual commitment for the prevention and fight against human trafficking.

Following the official ceremony, artist Florencia Pozo presented her art work entitled "Take a Pill of Life", which represents the different modes of trafficking in persons, aiming to raise awareness on this issue from an artistic standpoint. In addition, the audience enjoyed the play "Bruges noble", directed by Minor Hernández.

At the end of the event, blue lights were turned on around the Presidential Residence. At the same time, other emblematic buildings in the country were illuminated: the Municipality of San José, the Teatro Mélico Salazar, the Children's Museum, the State University at a Distance (UNED) and the Government's office for Immigration and Foreigners.