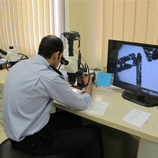 The laboratory receives and examines forensic evidence and provides advice, reports and expert testimony to the judiciary and other clients in forensic document examination, drug and chemical evidence, and firearm and tool mark evidence examination. Through a focus on impartiality, objectivity, technical competence, adherence to standards and protocols and quality assurance, the laboratory is designed to strengthen protections for fundamental human rights, including the right to a fair trial.

Highlighting the importance of the laboratory, UNODC's Representative for the Middle East and North Africa, Masood Karimipour, noted: "The establishment of the laboratory is a significant development for the Palestinian judicial system and it will help increase respect for the rule of law, which in turn will increase the safety and security of the Palestinian people."

The Governor General of Canada, for his part, noted that this will contribute to "building a law-based, peaceful society that responds to the needs and aspirations of Palestinians by improving the management of forensic services in the West Bank." Major General Atallah, meanwhile, expressed the appreciation of the Palestinian Government for the support provided to improve the efficiency and capacity of the Palestinian police and judiciary.

The laboratory, fully equipped with the latest scientific instruments, is operated according to internationally accepted standards. Staff at the facility have received training delivered by UNODC and other international forensic experts.

Publication: Terminology and Information on Drugs