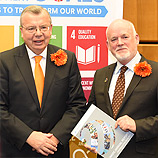 Mr. Thomson was speaking at a Special Event on the implementation of the 2030 Agenda organized jointly by the Commission on Narcotic Drugs (CND) and the Commission on Crime Prevention and Criminal Justice (CCPCJ), supported by UNODC and in cooperation with UNIDO. Participants at the meeting, which was attended by a large number of representatives of Member States and Observers, Vienna-based organizations and civil society, were briefed on Mr. Thomson's efforts to enhance education on the Sustainable Development Goals (SDGs) and his continued commitment to strengthen institutional relationships between the General Assembly and the Vienna-based Commissions.

The chairs of the Commissions, Ambassador Friedrich Däuble, Chair of the CCPCJ and Ambassador Vladimir Galuska, Chair of the CND, provided updates on the work of their respective Commissions and identified interlinkages with the Sustainable Development Agenda. "SGD 16 is touching the core mandate of CCPCJ, which works to tackle crime, corruption and terrorism and to strengthen the rule of law," Ambassador Däuble said. The CCPCJ also works towards establishing effective, fair and humane criminal justice systems. "The work of the Commission leading towards the adoption by the General Assembly of the United Nations Standard Minimum Rules for the Treatment of Prisoners (the Nelson Mandela Rules) in 2015 is an example of that," he emphasized.

For his part, Ambassador Galuska emphasized the linkages of the work of the CND in the area of drug prevention and treatment to SDGs 3, calling on states to ensure healthy lives and promote the well-being for all. The CND led the preparations for the General Assembly's Special Session in April 2016, which unanimously adopted the rich and forward looking outcome document - negotiated within the CND - considering the world drug problem from a broad and comprehensive perspective.

UNODC Executive Director Yury Fedotov reiterated that the 2030 Agenda provides a holistic, multi-dimensional framework for UNODC, recognizing that security, justice, the rule of law and health are central to achieving development for all. "UNODC is in the front line to globally monitor many of the targets under Goal 16," which calls to promote peaceful and inclusive societies, and to provide access to justice for all, he elaborated.

Also attending the meeting, Director General LI Yong of UNIDO reconfirmed the organization's support and commitment to the SDGs and emphasized their universality for the work of all United Nations organizations. "Vienna is a hub for industry, energy, science, technology, the rule of law and peace, and Vienna-based organizations have a major role to play in advancing the 17 integrated universal transformative Goals," Mr. Yong said on behalf of his organization, which currently celebrates its 50th anniversary.