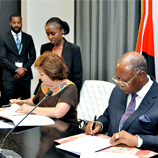 29 November 2016 - An agreement to undertake activities at reducing transnational crime between UNODC and the African Prosecutors Association (APA) was signed in recent days. The Memorandum of Understanding (MoU) between both bodies was signed in Luanda, Angola by Zhuldyz Akisheva, UNODC Regional Representative for Southern Africa and João Maria de Sousa, APA President and Angola's Attorney General.

At the signing ceremony, which occurred during the Annual APA meeting, Mr. de Sousa thanked UNODC for the ongoing cooperation with prosecutorial authorities and expressed confidence that the signature of the MoU will boost cooperation up to a continental level.

For her part, Ms. Akisheva highlighted the long history of cooperation with African prosecutors through global programmes and a network of UNODC offices across the continent. Ms. Akisheva added that goals for the promotion of high standards in the administration of criminal justice and in countering transnational organized crime are common to both UNODC and APA. She also emphazised the role of prosecutors in upholding the Rule of Law, which is key in the new Sustainable Development Agenda.

During the latest APA meeting, the challenges that the African prosecutors come across were also discussed, especially in the prosecution of corruption, money laundering and cybercrime. Discussions included the need for a more effective sharing of information, best practices, and facilitating mutual legal assistance among prosecutors in the region. The Asset Recovery Inter-Agency Network for Southern Africa (ARINSA) was presented as an example of such cooperation.