UNODC presents campaign to fight migrant smuggling to the AIAMP 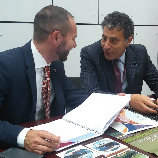 13 October 2016 - #ADeadlyBusiness, a UNODC campaign to prevent and combat migrant smuggling, was presented yesterday in Lisbon, Portugal, during the XXIV Ordinary General Assembly of the Ibero-American Association of Public Prosecutors Offices (AIAMP).

Antonio Mazzitelli, UNODC Representative for Mexico, indicated that even though media attention is currently focused on the migration emergency at the Mediterranean Sea, the Ibero-American region has suffered, especially in the last decade, the negative effects of migrant smuggling such as human rights violations and millionaire profits for the criminal networks.

"Many of the migrants are fleeing from armed conflicts, economic crises or religious persecutions. They entrust the smugglers their lives and embark on dangerous journeys by sea in overcrowded boats; or by land, stacked inside trucks. The investigation of the criminal networks that generate this harmful situation constitutes for the Attorney Generals one of their biggest challenges", said Mr. Mazzitelli.

Felipe De La Torre, UNODC Programme Management Officer, delivered a presentation on the campaign and explained that #ADeadlyBusiness expects to raise awareness among migrants on the risks of using smugglers to cross borders irregularly. The campaign also seeks to articulate an inter-institutional dialogue among different actors within the justice sector to professionalize the investigation and prosecution of the crime, while strengthening the mechanisms to protect the migrants.

Another objective of the campaign is to build bridges with the media to reach the most vulnerable populations and make visible that migrant smuggling is a deadly business linked with violence and other serious crimes.

All the communication tools of the #ADeadlyBusiness campaign were developed in Spanish and translated into Portuguese for this session. Through a range of products, including posters, videos, a toolkit, infographics and radio spots, the campaign illustrates each of the smuggling methods used by criminals, covering land, sea, and air.

The campaign was developed within the framework of a regional project financed by the European Union entitled "Promotion of international cooperation between Mexico and Central America to prevent and combat the smuggling of migrants" which has been operating since 2013.