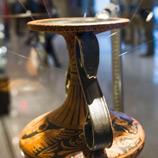 22 Septembre 2016 - There is an urgent need to enhance the protection of cultural heritage targeted by terrorists and illicit traffickers, according to the newly launched report of the global initiative "Protecting Cultural Heritage-An Imperative for Humanity" developed jointly by UNODC, UNESCO, INTERPOL and the Governments of Italy and Jordan in 2015. The report was presented today in parallel to the 71st session of the General Assembly in New York.

The world is witnessing an unprecedented increase in terrorist attacks on, and destruction of, the cultural heritage of countries affected by armed conflict and organized looting, illicit trafficking and ransack of world heritage sites. Terrorist groups are using these acts as a tactic of war to intimidate populations and governments. In addition, these acts aim to generate income for terrorist groups across the Middle East and beyond, which is then used to support their recruitment and operational efforts.

In order to address such threats more efficiently, the "Protecting Cultural Heritage-An Imperative for Humanity" initiative held a series of high level technical meetings in 2015 and 2016, which has led to a list of concrete actions, including, among others, a call for ratification and implementation of relevant international instruments, enhancement of the collection of data, strengthening the use of existing tools such as the INTERPOL database of stolen works of art, the WCO ARCHEO platform, all ICOM red lists, UNODC's knowledge management portal SHERLOC and UNESCO Database of National Cultural Heritage Laws.

The Deputy Prime Minister and Minister of Foreign Affairs of Jordan, Nasser Judeh, said at the report's launch: "Decades from now, generations will judge us by the courage we showed and actions we took to preserve their and our heritage and culture. Preserving this heritage is the collective duty of this generation to many generations to come."

Rallying partners to enhance the protection of cultural heritage, the Minister of Foreign Affairs and International Cooperation of Italy, Paolo Gentiloni, added: "Cultural heritage is a reflection of human history, civilization and the coexistence of multiple peoples and their ways of life. Its protection is a shared responsibility of the international community, in the interest of future generations."

While advocating for increased political commitment, the Director-General of UNESCO, Irina Bokova, said: "The protection of heritage cannot be delinked from the protection of human lives. We must unite for heritage as a powerful catalyst for dialogue and tolerance - it must become part of peacebuilding, built early into security and humanitarian considerations."

UNODC Executive Director, Yury Fedotov, for his part emphasized the urgent need to combine efforts in addressing the issue of the trafficking and the destruction of cultural property. He said, "We have no time to lose. We need more effective cooperation between all actors, including Member States, the international community, non-governmental organizations and the private sector."

Jürgen Stock, Secretary General of INTERPOL, the world's largest police organization, stressed that "Member States can act to deter the demand for illicitly obtained cultural heritage items in destination markets. It is our duty to protect the cultural heritage of mankind, as the most amazing symbol of our past, in order to protect our future "

The report also calls on strengthening outreach, educational and awareness raising activities, building notably on the global #UNITE4HERITAGE campaign, spearheaded by UNESCO, to mobilize youth across the world for the protection of heritage as a driver of peace and resilience.

Report of the initiative