UNODC Report: Transnational organized crime is undermining security and governance in the Pacific 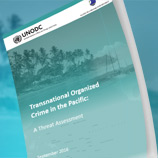 22 September 2016 - The Pacific is increasingly vulnerable to exploitation by transnational organized crime, law enforcement agencies in the region are largely unable to manage territorial borders, and governments and regional organizations are struggling to address the situation, according to a comprehensive report launched today by the UNODC. Titled "Transnational Organized Crime (TOC) in the Pacific: A Threat Assessment", it is the first UNODC report to examine major illicit trafficking flows and issues in the region following Security Council calls to address security threats to fragile small island states in 2015.

Developed in close partnership with the Pacific Islands Forum Secretariat (PIFS), the report draws together information and cases from the Pacific, with supplementary information from neighbouring East and South-East Asia and the Americas, to assess illicit flows impacting the region. Four major transnational organized crime types are covered in the report: drug and chemical precursor trafficking, human trafficking and migrant smuggling, environmental crime, and trafficking of small arms.

The report also identifies some factors that facilitate illicit transnational activities affecting the region. "The Pacific is increasingly integrated and connected with other regions, especially Asia, but also the Americas," said Jeremy Douglas, UNODC Regional Representative for Southeast Asia and the Pacific. "Connecting with the rest of the world can be positive from a development perspective, but it also means that the region is more susceptible to accompanying crime and security challenges," he added.

The report also examines illegal fisheries and logging in the Pacific, highlighting how related illicit activities and trafficking threaten sustainability and the livelihoods of people and communities in the region. "Organized crime profit from the environment by illegally taking and trafficking resources, and they do not care about how devastating it can be for a small state," said Mr. Douglas. He also noted that "Pacific island countries rely on fisheries and forests for more than just GDP; they need them for basic survival."

Exploitation of environmental resources of Pacific island countries can also be linked to human trafficking in the region. "Trafficking in persons for labour exploitation sometimes occurs in logging camps and on commercial fishing vessels operating in the Pacific," said Andie Fong Toy, Deputy Secretary General of the PIFS. She also pointed out that the geographical location of Pacific island countries makes them a possible transit point for smuggling of migrants and trafficking of people into Australia, New Zealand and the United States, including with falsified passports and travel documents.

In addition to analysis of cases and trends related to illicit flows in the region, the report recommends that the region update related laws and policies, develop strategic data and research, and build capacity for international cooperation and operations. "We have been working with countries and regional institutions in the Pacific in recent years, but it is clear that this needs to be scaled-up," said Mr. Douglas. "What we are proposing fits with the Framework of Pacific Regionalism adopted by the PIFS, and we will support the region to respond to security and development threats posed by transnational organized crime".

Report - Transnational Organized Crime in the Pacific: A Threat Assessment

Transnational Organised Crime is East Asia and the Pacific