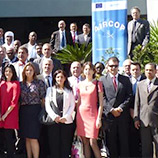 4 April 2017 - Experts from around the world met today in Sao Paulo, Brazil, for three days of discussions, aiming to enhance the capacity of international airports in the detection and interdiction of drug trafficking and other illicit activities. The 5th Global Meeting of the Airport Communication Project (AIRCOP), which covers 37 airports in 33 countries, is taking place from 4 to 6 April, organized by UNODC with the support of the Federal Police of Brazil.

In his welcome remarks, Amado Philip de Andrés, UNODC Regional Representative for Central America and the Caribbean, highlighted that "AIRCOP began in 2010 with 8 countries and has since expanded to 33 countries in Africa, Latin America, the Caribbean and the Middle East, with a potential to further expand to other regions. AIRCOP contributes to implementing UN Drug Control Conventions as well as UN Security Council Resolutions 2309 (2016), 2178 (2014), through assisting Member States to counter the world drug problem and criminal activities, as well as to deter travel of suspicious passengers and threats posed to civil aviation."

Disney Rosseti, Regional Superintendent of the Federal Police in Sao Paulo, said that "combating drug trafficking it is not a choice, but an increasingly need to seek social peace and a society free from the scourge of organized crime."

For her part, Claudia Gintersdorfer, Deputy Head of the European Union Delegation in Brazil, said "AIRCOP is part of the EU Cocaine Route Programme, a concerted effort by the European Union and its partners to staunch the flow of illicit goods and facilitate communication and cooperation of criminal investigators and prosecutors. Since 2009, the EU has committed over €50 million to the programme in over 40 countries with a focus on transnational organized crime and drug trafficking in Latin America, the Caribbean, Africa to Europe."

The meeting promotes experience and best practice sharing in the fight against illicit trafficking via air routes, and in strengthening airport controls. AIRCOP aims at preventing flows of illicit goods, and at detecting and enhanced screening of high-risk passengers at selected international airports through real-time exchange of operational information, as well as through the establishment, training and mentoring of inter-service Joint Airport Interdiction Task Forces (JAITFs).

Since its launch in 2010, AIRCOP project trained 2426 law enforcement officials, including 499 women, through 143 training and mentoring activities and joint operations. This enabled the JAITFs to seize 2,897 kg of cocaine, 1156 kg of cannabis, 326 kg of heroin, 549 kg methamphetamine, 1,397 kg of counterfeit medicines and 541 kg of ivory, resulting in 788 seizures and over 800 arrests.

AIRCOP Project is funded by the European Union, Japan, Canada, Norway, and the US, and implemented by UNODC in partnership with the World Customs Organization (WCO) and INTERPOL.